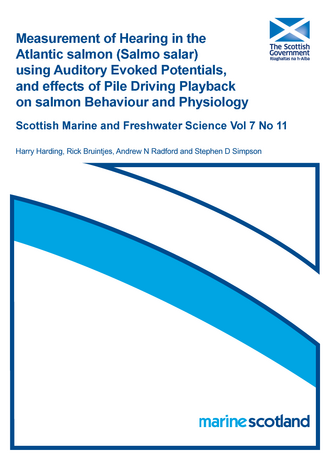 Anthropogenic (human-generated) noise is widespread in aquatic environments and is increasing in prevalence and intensity (Hildebrand, 2005). Aquatic noise-generating activities include high intensity air guns used for seismic exploration, chronic low-frequency noise from shipping, and noise produced during construction and operation of offshore energy installations (Hildebrand, 2005; McDonald et al., 2006; Normandeau Associates 2012). The noise produced during such activities is very different to sounds that typically arise from natural sources (Hildebrand, 2009; Popper & Hastings, 2009; Normandeau Associates 2012; Radford et al., 2014). The continued development of Marine Renewable Energy Devices in Scottish coastal waters is recognised as an important step in the UK's drive for clean, low carbon energy. The unavoidable noise caused by such developments, principally pile-driving used in the construction of offshore windfarms, has raised concerns about the potential impact of noise on sensitive marine species. As a result, energy entering the sea in the form of anthropogenic noise has been included in the European Commission Marine Strategy Framework Directive, providing a statutory responsibility for member states to monitor sound levels. However, knowledge on hearing abilities of potential receptor species and potential impacts of underwater noise on marine organisms is incomplete.

To assess hearing abilities of fish, Simpson has developed a mobile Auditory Evoked Potentials ( AEP) electrophysiology system that can be taken to locations where fish are held, thus maximising application of this audiometric approach while minimising stress to focal animals from transportation. This approach was used to determine the hearing thresholds of a number of cohorts of Atlantic salmon.

Given the potential widespread range for behavioural impacts of anthropogenic noise, we considered the impact of noise on movement patterns in Atlantic salmon ( Salmo salar). Atlantic salmon are known to detect low frequency acoustic stimuli below 380 Hz (Hawkins & Johnstone, 1978), coinciding with the dominant frequencies produced during impact piling operations (100 Hz to 2 kHz; Bailey et al., 2010; Hawkins et al., 2015). The construction noise from offshore windfarms, therefore, has the potential to interact with the two migratory stages of the Atlantic salmon life cycle, through salmon avoiding noisy locations (region where noise from the source is above ambient ocean levels; Nedwell & Mason, 2012). For adult Atlantic salmon, the concern centres upon impact pile driving in coastal regions delaying or preventing the migration to natal rivers, with potential consequences on spawning. Following this, we considered whether changes in movement behaviour were a consequence of an altered physiological state, measuring changes in dissolved oxygen consumption, a proxy for metabolic rate, for use as an indicator of stress (Barton, 2002, Simpson et al., 2015).

In this study, we adapted established methodologies to consider the potential impact of pile driving noise on Atlantic salmon behaviour and physiology (see Simpson et al., 2015). As a starting point to address these questions, we performed carefully controlled laboratory based experiments using underwater playback. Although the stimulus produced within the laboratory setup can't accurately represent the sound field from a real noise source in an open soundscape (Normandeau Associates 2012), the use of the aquarium facilities enabled the tight control of potential confounding variables (Bruintjes & Radford 2014; Simpson et al., 2015), and allowed testing of potential impacts in controlled conditions. We investigated the behavioural and physiological impact of the additional noise of piling driving compared to ambient control conditions.

This report is divided into two sections:

Part 2: The Impact of Pile-Driving Playback on the Behaviour and Physiology of Atlantic salmon ( Salmo salar)

Hearing assessments were carried out with the approval of the University of Exeter Ethical Review Committee (2013/247), under Home Office licences (Project Licence PPL 30/2860, Personal Licences PIL 60/10650 (Steve Simpson) and PIL 30/9624 (Rick Bruintjes)and in consultation and with regular monitoring from MS pathologist Dr David Bruno. Training and accreditation in AEP electrophysiology had been previously undertaken by Steve Simpson under the guidance of Dr Dennis Higgs (University of Windsor, Ontario). All behavioural and physiological experimental procedures were approved by the University of Exeter Ethics Committee (2013/247) and the Marine Scotland Science named vet, and were deemed by the Home Office as being below the level of severity that would require licensing, although an appropriate licence was in place ( PPL 30/2860). Prior to each experiment, fish were given time to recover from transfer and to acclimatise to the experimental set ups. Fish husbandry was in accordance with the standard operating procedures of the Marine Scotland ( MS) Marine Laboratory.