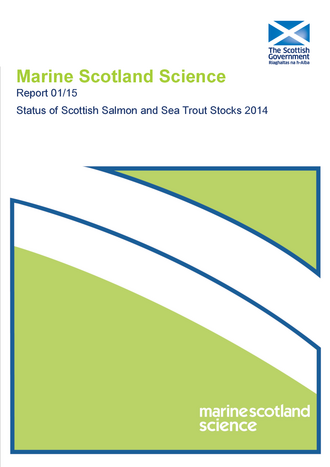 Adult salmon abundance can be estimated from reported rod catches, data from fish counters and fixed traps. Previous assessments using this information have suggested that the overall number of Atlantic salmon returning to Scottish rivers generally increased over recent decades with variation among stock components and regions. In particular, spring stocks had declined, stabilising at a low level in recent decades and limited information from fixed traps located on spring salmon tributaries suggested that the number of returning adult salmon was frequently below the level required to maximise production of juvenile emigrants. Consequently, spring salmon stocks were considered worthy of particular management consideration.

Rod catches in 2014 were particularly low across all seasons for the majority of Scotland and the MSS rod catch tool suggests evidence of widespread declines in recent years. These trends raise concerns that low survival rates of salmon at sea, which were largely compensated in Scotland by reductions in coastal netting activity, may now be affecting numbers of spawning salmon. However, limited catch independent data (from traps and validated counters) did not show the same major decline in salmon abundance between 2013 and 2014 suggesting that poor angling conditions may have also contributed to the low reported catches.

Rod catches indicate that the number of sea trout returning to Scottish rivers has probably been in decline for much of the period 1952-2014. While catches of sea trout in many areas of Scotland are at historically low levels, there have also been notable declines in the last 20 years in central-eastern, south west and north west areas of the country.