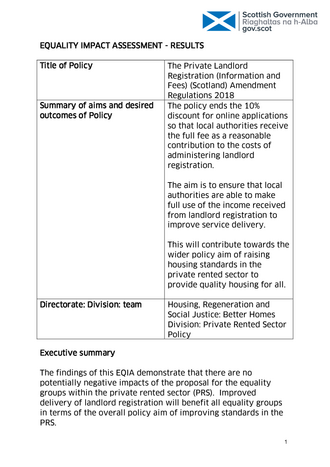 The findings of this EQIA demonstrate that there are no potentially negative impacts of the proposal for the equality groups within the private rented sector ( PRS). Improved delivery of landlord registration will benefit all equality groups in terms of the overall policy aim of improving standards in the PRS.

Landlord Registration was introduced by the Antisocial Behaviour etc. (Scotland) Act 2004 as a policy to help raise standards in the PRS.

A 10% discount was granted on the application fee to encourage landlords to apply for registration using the internet based system, when the policy was first introduced in 2006. This helped to reduce the initial administrative burden on local authorities as they carried out their new regulatory functions. The discount was not intended to reflect any difference in cost of processing on-line and paper applications.

Now that landlord registration is well established, it is clear that the internet based system offers the most efficient and effective way to apply for registration for the majority of people. Only around 5% of applications are submitted in paper form. The policy therefore ends the 10% discount for online applications so that local authorities receive the full fee as a reasonable contribution to the costs of administering landlord registration.

The aim of the policy is to to support more effective administration of landlord registration as a means of helping to raise standards for those who live and work in the PRS. The policy covered by this EQIA will contribute to the National Outcomes:

The policy also contributes to the Government's vision that all people in Scotland live in high quality, sustainable homes that they can afford and that meet their needs.

The policy mostly affects private landlords and local authorities. The likely effects of the policy are informed by public consultation and direct stakeholder engagement on a range of options for increasing landlord registration application fees. Scottish Government officials have also considered evidence from the following pieces of research that relates to private landlords and the protected characteristics:

Examination of available evidence during the EQIA process has highlighted a number of key findings, in relation to landlords in Scotland, and also in the wider UK context.

In the wider UK context, the 2013 survey found that there had been a steady increase in the number of private landlords as a proportion of the population and a rise in the prevalence of private landlords among the middle-aged. Landlords were generally aged between 35 and 64, with nearly three-quarters (73%) in this age group. A significantly larger group of landlords were in this age range in comparison to both non-landlord homeowners (59%) and of all adults aged 16 or more (50%). The median age of PRS landlords was 48, which was younger than non-landlord homeowners (53), but older than the average of the adult population, which was 45.

The 2009 review found that in relation to gender, there was almost an exact male to female gender balance amongst individual and couple owners. Male owners were more likely than females to be landlords of dwellings owned by full time landlords (70%), by business landlords (72%), 67% of longer standing landlords (those who started up before 1989) and those with the largest portfolios (100 or more dwellings – 85%). Men are also more likely (61%) to be owners of dwellings whose landlords get 75% or more of their total income from residential lettings.

The 2013 survey found that in the wider UK context, there were a higher proportion of male PRS landlords than the general adult population. Whereas 54% of PRS landlords are male, 49% of all adults are.

The survey also found that 1% of all PRS landlords identified as sick or disabled. This is the same as for non-landlord homeowners and all adults aged 16 or more.

The 2009 review found that around 5% of dwellings were owned by members of the non-white ethnic groups. Only in Glasgow is this percentage higher, where more than 1 in 10 dwellings (14%) were owned by members of non-white ethnic groups. The 2013 survey found that in the wider UK context there was no significant difference between the proportion of white PRS Landlords (88%) and white adults aged 16 or more (89%).

Data on the composition and characteristics of landlords within the PRS in Scotland is not as extensive as the data routinely collected on tenants. However, we have used the availabe evidence to consider how the proposals impact on landlords with protected characteristics within the PRS. Combined with the findings of the Business and Regulatory Impact Assessment, we do not consider there to be a significant negative impact.

The policy does not constitute a strategic decision and is not relevant to reducing inequalities of outcome caused by socio-economic disadvantage. There is no evidence to indicate that landlord businesses are a socio-economically disadvantaged group and so it is not proportionate to carry out a Fairer Scotland Assessment on this policy.

The policy to end the 10% on-line discount will not have a significant impact on landlord businesses and this change is unlikely to have a knock on effect to tenants who live in the PRS. The Scottish Government has found that the policy is not discriminatory and has found no significant issues that will impact negatively on any of the various equality groups. The EQIA process has not highlighted the need for any major changes to the policy.