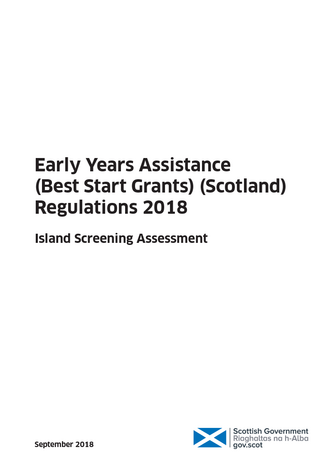 1. The Islands (Scotland) Act 2018 [1] provides for a new duty on the Scottish Ministers and other relevant public bodies that they must have regard to island communities in exercising their functions and in the development of legislation.

2. The Social Security (Scotland) Act 2018 (the Act) was brought forward following the changes to the devolution settlement enacted in the Scotland Act 2016.

3. Section 32 [2] and Schedule 6 [3] of the Act make provision for Early Years Assistance and require that Scottish Ministers make regulations to set out eligibility criteria, responsibility for a child, who will qualify and the value of payments. The BSG will be a form of Early Years Assistance, intended to support lower income families with children by offering financial support at key transition points in early years, and is intended to improve children's wellbeing and life chances.

5. The regulations provide detailed rules relating to the BSG Pregnancy and Baby payment only but this assessment relates to all 3 BSG payments, pregnancy and baby, early learning and school age payments. They include provision for eligibility, including residence, what assistance is available, the value of the payments and when to apply. The regulations also include provision for timescales for the processing of redeterminations and certain issues of process relating to application dates. Further rules will be set out in operational guidance.

6. The Scottish Fiscal Commission ( SFC) is responsible for producing independent forecasts of devolved social security expenditure. For BSG Pregnancy and Baby payment, the SFC will publish forecasts alongside the laying of the BSG regulations.

7. Based on assumptions from the SFC model, in the first full year of running 2018‑19, we estimate that there will be 12,500 BSG Pregnancy and Baby payments with a total cost of £5.5m. Once the Early Learning and School payments are added, we estimate that the total number of payments annually will be in the region of 39,000 at a cost of £12.1m, based on 2019-20 figures.

Public Consultation and Approach to the Regulations

8. The BSG has been developed with detailed consultation and engagement with stakeholders.

9. The Scottish Government's Consultation on Social Security, a New Future [4] ran from 29 July 2016 to 28 October 2016. Respondents represented a wide range of individuals and organisations with knowledge and experience of, or an interest in social security matters, including from island communities and organisations representing island interests. The independent analysis of the responses [5] , along with the Scottish Government response [6] were published on 22 February 2017. The BSG section sought views on key aspects of the benefit and received over 100 responses from both individuals and organisations.

10. The main issues raised by island stakeholders were in relation to accessibility and choice. It was recognised that Skype and other forms of video conferencing can improve accessibility and avoid the need to travel distances which can be time consuming, expensive and difficult for people living in rural and island communities.

11. Respondents suggested that digital would not always be the best delivery model for everyone (particularly given the digital connectivity challenges in rural and island communities) and therefore other engagement and application channels would need to be available. There will always be some people who need face to face contact, due to digital exclusion, disability or difficulty in communicating.

12. The BSG Reference Group [7] was established in October 2016 to help gather evidence, bring a variety of informed perspectives and provide feedback on proposals.

15. Early Years Assistance, a consultation on the best start regulations [8] ran from 26 March to 15 June 2018. There were 51 responses which helped us to finalise policy. Views were sought from organisations and individuals in relation to whether the draft regulations would meet the policy aims.

16. In response to a question on whether qualifications by Universal Credit ( UC) should be an award of more than £0 in the month in which the application is made - one organisation urged caution in areas, particularly in rural Scotland, suggesting that seasonal and zero hours contracts are more prevalent within the economy resulting in UC awards being at £0 for a number of months. Where eligibility is established for BSG using UC as a qualifying benefit, applicants will qualify if the UC award is more than £0 in the month of or the month before the application. This will mean that an applicant knows when they apply that there is an award of UC in place. BSG also has wide application windows; 10 months for the pregnancy and baby payment, 18 months for the early years payment and 9 months for the school payment. In combination, this should allow people with fluctuating income to qualify.

17. The Scottish Government will continue to engage with stakeholders through a range of advisory groups and the establishment of 'Experience Panels'. The guiding principles for social security in Scotland made a commitment to put people with lived experience first, and that the new system would be designed with people who have direct, personal experience of using the current system. By participating in a panel, people can share their experience of the benefit system and help to build a social security system that works for the people of Scotland when they need it.

18. The Scottish Government led an extensive campaign to recruit volunteers from across all of Scotland. The campaign was undertaken in partnership with local authorities and key partner organisations to make sure that people living on the islands were aware of the opportunity and knew how to get involved. As part of the registration process, the Scottish Government asked all Experience Panel members about their contact preferences, and additional support needs to ensure that those living in rural and island communities have a choice in how they participate in Experience Panels, and that they are supported to take part. For example, whether that be support with travelling to a Panel, or by enabling people to participate through digital means. We also hold panel events across Scotland to minimise the amount of travel needed for people to participate. This includes events which have been held in Shetland and Orkney.

19. The initial recruitment drive came to an end in June 2017, and over 2,400 people across Scotland have signed up to participate in the panels. . Although the majority of the volunteers live in the central belt, there is widespread representation across Scotland, including panel members located in all local authority areas, including Orkney, Shetland and Comhairle nan Eilean Siar, Highland, Argyll and Bute, and North Ayrshire. Further recruitment will take place in 2018 to make sure that we hear from as many people as possible in geographical areas where the number of people signed up is lower or from certain demographic groups where participation is lower. A summary of research findings for BSG from the experience panels was published in August 2018. [9]

20. Delivery of the BSG will be through Social Security Scotland, an Executive Agency, with operational staff based in the Dundee Headquarters and Glasgow office, supplemented by a local delivery function.

21. In April 2018 the first stage of recruitment for the 400 locally based jobs with Social Security Scotland was launched. This was for Local Delivery Relationship Leads who will be part of a national team at the forefront of preparing and shaping the agency's local presence across Scotland.

22. The Scottish Government is committed to ensuring that the agency and its services will be accessible to everyone across Scotland, including those living in the islands. When exploring options for the agency's local presence the Scottish Government will ensure that it complements and is joined up with existing services, and is located in places people already visit, where possible. This may include considering co-location with third sector and other organisations, depending on the area and people's needs.

23. The Scottish Government will work with COSLA and other stakeholders to explore possible co-location opportunities for the Agency and to understand the

different needs of communities, including island communities, when delivering local services across Scotland.

24. The Scottish Government is keen to ensure that as much information as possible will be online, as well as allowing for the electronic submission of applications. However, the Scottish Government is aware that some remote and island communities may not have access to digital services nor is it everyone's preferred choice of communication. Some island councils have also highlighted the challenges that face those who have to travel a great distance to attend assessments. The Scottish Government is aware that people want tailored solutions to suit their different preferences and need, and will therefore work to ensure the availability of digital, telephone and face to face communication channels where possible. Ahead of local services becoming fully operational the Local Delivery Relationship Leads will also be responsible for the recruitment of the teams who will provide people with face-to-face support to help them understand what devolved benefits they are entitled to, help complete applications, support people through the process and any follow up actions relating to their case.

25. The Act proposes a duty on the Scottish Ministers to publish an annual report on the performance of the Scottish social security system, which will include information on the impact of island-proofing.

26. The Scottish Ministers have also committed to engaging with, and reporting regular progress to, the Islands Strategic Group to ensure that those representing the interests of island communities and others with experience of the current system, are fairly represented in the development and delivery of the Scottish social security system.