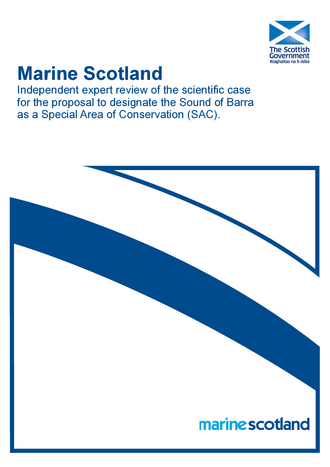 The main aim of the peer review exercise was to " consider whether the scientific evidence supporting the proposal has been used appropriately and that the assessment correctly reflects the requirements of the EU Habitats Directive".

This report comprises the review of evidence for the proposed Sound of Barra Special Area of Conservation ( SAC). In doing so the review considered the following questions:

In the light of the consultation documents it is worth stating clearly what is NOT included in the Terms of Reference for this review:

The assessment was undertaken in 3 steps:

A review was undertaken of the Site Selection Document ( Contribution to the Scottish Component of the UK Special Area of Conservation ( SAC) List: Selection of Sound of Barra to represent sandbanks, reefs and Harbour Seals in the Western Isles)and other supporting documentation provided by SNH.

Also as part of the site visit, there was a systematic examination of the data used to support the Site Selection Document. Care was taken to examine representative examples of all types of data including GIS layers, species lists and images from both still and video camera surveys.

Quality, quantity and analysis of biological and geomorphological data:

The Sound of Barra proposal was supported by a wide range of evidence including multi-beam data, satellite data, video tows, diver video and grab samples. The Sea Mammal Research Unit ( SMRU) seal surveys were used to assess the harbour seal populations. The GIS base-map shown to the reviewers demonstrated that the data gathered by SNH provided a comprehensive spatial coverage across the entire area of interest.

As there were a large number of survey stations, the reviewers undertook a systematic examination of a selection of stations. The stations were chosen to span the site area (from shallow western areas through to deeper eastern areas) and represent the different Annex 1 Habitats, namely 'Reefs' and 'Sandbanks which are slightly covered by sea water all the time' (Table 1: Figure 1).

The reviewers did ask about the role of 'historic data' [1] as a number of older surveys were shown on the initial GIS base-map. SNH stated that the area had been extensively resurveyed and that the historical data were only used to direct recent surveys, and were not used directly as part of the current evidence base. The importance of only using fairly recent data [1] was stressed in order to have a high confidence in the assessment.

To summarise, the reviewers were satisfied that there were sufficient data of appropriate quality to provide scientifically robust support for the site recommendation.

Interpretation of biological and geomorphological findings:

The reviewers queried the statements in the Site Selection Document on seagrass density as seagrass is recorded as a subtype of sandbanks. There appeared to be a contradiction in two statements, the first ( P6, 2 ndpara) stating that the"…density of the Zostera [seagrass] is often low" and the second ( p8, 2 ndpara) stating that the site "…supported dense beds of the seagrass Zostera marina…". SNH responded to this by providing the following statement:

Having checked with Commissioned Report ( CR) no.258 I conclude that I wrote the text in the site selection document on the basis that Zostera tends to form bands of dense seagrass alternating with open sand. Therefore, although the overall density within the whole geographic areas of Zostera distribution was low, where the Zostera specifically grows it can be found in dense patches. Please see Summary (Main findings section), p20 (Section 3.1.1), p46 (Section 3.4.1), p66 (Section 4.2.1), p95 (Section 5.1), and p219 (Table 7.6.1), for reference to these research findings.

The reviewers are satisfied therefore that there was no misinterpretation of the evidence base with the statements being complementary rather than contradictory.

There was also a question concerning a comment on the Maerl beds (P10, 2nd bullet), another sandbank 'subtype'. The report states that the Maerl ' provides a complex niche for a diverse group of species'. The reviewers asked whether this was supported by evidence or was just an assumption about the habitat. The answer to this is important in terms of statements on the value and condition of the habitat. SNH provided evidence from report Commissioned Report ( CR) no. 258 (listed in Annex 1). From this evidence it appears that the statement is well supported by both habitat knowledge and results from sampling in the area (infaunal cores and drop-down video).

Overall the reviewers were satisfied that the interpretations of the evidence were correct with respect to the various grades given to the site features.

The reviewers were satisfied that the boundaries were supported by high quality data. However, there was a question over the 'eastern corridor' in terms of quality of the habitat. Although qualifying feature was clearly present, the videos seemed to indicate that this habitat was not as high quality as the other habitat within the site. However, if current pressures associated with scallop dredging were managedit seems reasonable to assume that habitat quality would improve. Consequently, the reviews are in agreement with SNH that the boundaries are drawn appropriately and the area does not contain significant areas of non-qualifying habitat.

The reviewers were satisfied with the conclusions drawn from the evidence base. There were however some minor questions over statements on the condition of the area and on impacts. Firstly, it was noted that the mariculture leases had been considered in terms of potential impact in three areas on harbour seals. However, the reviewers noted that there is a body of research showing the impacts of mariculture on benthic communities so this should be noted in relation to the sandbank and reef habitats.

Related to this was the importance of providing evidence for assumptions on condition. Page 12 of the Site Selection Document states " it is not considered that sustainable fishing by creels will result in significant impacts with respect to the reef features within the Sound of Barra". It is important to state what evidence underpins this assumption.

SNH have agreed to amend the Site Selection Document accordingly based on the comments above.