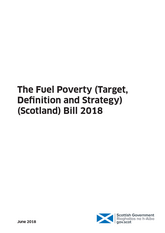 Scotland is one of only a handful of European countries to define fuel poverty, let alone set a goal to eradicate it. Achieving the target will place Scotland amongst the very best in the world in terms of tackling fuel poverty.

A new target for fuel poverty

The proposed fuel poverty statutory target is to ensure that, by 2040, no more than 5% of households in Scotland will be in fuel poverty. This target recognises that there will always be households that move in and out of fuel poverty due to changes in their incomes and energy costs.

The target is challenging, and can only be achieved by taking actions across all four drivers of fuel poverty:

Achieving these aims will mean intervening to improve people’s homes and the way that they live in them in a way government has never done before to make them easier and more affordable to heat. We must therefore ensure that the public understands and supports the steps needed using a mix of advice, support and other incentives. Everyone – local government, businesses, the third sector, landlords, tenants and home owners – will all need to play their part.

Improving the energy efficiency of our homes is a long term permanent way to help tackle fuel poverty. This must be closely linked with ensuring that our homes have efficient heating systems. We know that low carbon heating must be part of how we heat our homes in future. We will achieve this in a way that balances the need to meet our fuel poverty targets alongside our decarbonisation and greenhouse emission reduction targets under our Climate Change Plan.

A Fuel Poverty Strategy for all of Scotland

The Bill requires Scottish Ministers to publish a strategy setting out how they will eradicate fuel poverty and regularly report to Parliament on it. The Strategy will explain how we intend to drive forward progress towards meeting the ambitious targets in the Bill. A Draft Strategy has been published alongside the Bill based on the principles of fairness and equality for all, reflecting the different needs of all of Scotland’s urban, suburban, rural and remote communities.

This Bill sets out our statutory target to eradicate fuel poverty. Our Energy Efficient Scotland Route Map is the delivery mechanism which will improve energy efficiency and remove it as a driver of fuel poverty. To that end, we are currently consulting on the proposal that all homes with fuel poor households should be EPC C by 2030 and then EPC B by 2040, where technically feasible, cost effective and affordable.

Income and energy costs are primarily driven by powers reserved to the UK Government such as energy policy and most of the welfare system. Between 2003 and 2016 median household incomes in Scotland rose by 38% whilst fuel prices rose by 155%. The cost of energy is out with the powers of the Scottish Government and there are limited ways that we can directly influence incomes. Nevertheless, we are using our existing devolved powers to influence where we can. We are spending more than £100 million every year to help relieve the impact of UK welfare cuts and to protect the incomes of some the poorest households in Scotland.

Home Energy Scotland ( HES) will continue to provide advice on how best to use energy in the home as well as on energy efficiency schemes and funding. The Draft Strategy sets out how we will ensure consumers have advice and support on switching to the best offer available, which will help them reduce their fuel costs. It also sets out how we will maximise incomes, including through actions set out in our Fairer Scotland Action Plan and through our efforts to boost jobs in a low carbon economy.

A New Definition of Fuel Poverty

Under the proposed new definition, a household must fulfil both the following criteria:

We will be innovative and use as our acceptable standard of living criteria the UK Minimum Income Standard ( MIS) produced by the Centre for Research in Social Policy at Loughborough University. This will be set at 90% of this standard, after the costs for fuel, housing, council tax, water rates and childcare are deducted. The MIS thresholds, for most household types, are considerably higher than the commonly understood measure of relative income poverty; the 60% median income after housing costs.

This means that we can capture households above the income poverty line that are struggling with their fuel bills so that we can target those households who are in real financial need.

Our initial analysis of the proposed new definition indicates that around 24% of Scottish households (584,000) were living in fuel poverty in 2016.

The new definition, like the original, also recognises these regional climate variations as well as different types of housing stock and information about the people living in each household. This means that greater energy usage estimates are applied in the calculation for remote, rural and island communities where appropriate. In addition, we are also currently reviewing the weather information used in Building Research Establishment Domestic Energy Model ( BREDEM), the state of the art model we use to estimate a household’s energy consumption as part of estimating fuel poverty, as well as how fuel prices are applied, with the aim of making these more localised where possible.

The Fuel Poverty (Target, Definition and Strategy) (Scotland) Bill will ensure that by 2040, fewer than 5% of households will be in Fuel Poverty. The new fuel poverty definition is much better aligned with low income households, allowing us to better focus on those in greatest need. The Scottish Government will continue to take into account the higher energy demands and costs experienced by those who live in remote and/or rural households. The Energy Efficient Scotland Programme strengthens that support and will be the primary delivery mechanism for eradicating Fuel Poverty by 2040.