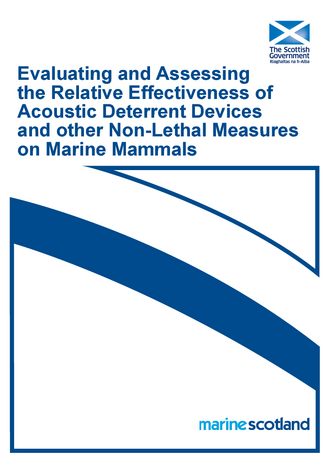 Acoustic Deterrent Devices ( ADDs) have long been used to try to keep animals away from human activities. They have been developed in the marine environment particularly to keep marine mammals away from fishing operations, aquaculture sites and more recently to keep marine mammals away from industrial operations that might be harmful to the animals themselves. This review attempts to synthesise the costs and benefits of the acoustic deterrent approach, drawing on a wide range of examples and types of deterrent device, but the primary focus is on the use of ADDs in aquaculture.

The aquaculture industry is probably still the main market for ADDs. The levels of damage caused by pinnipeds are poorly documented but such damage is generally thought to be a significant operating cost in Scotland at least. Damage caused by pinnipeds includes torn nets, direct damage to or removal of fish or indirect damage through reduced growth. The exact mechanisms involved in depredation are not known. ADDs are a widely used method of trying to minimise such damage. Solutions other than the use of ADDs include the use of anti-predator nets, more robust netting material, frequent removal of dead fish, 'blinds' that conceal dead or moribund fish at the bottom of cages and better tensioning of the net pens, as well as translocation and lethal removals. Electric fields and conditioned taste aversion have also been suggested but have not yet to our knowledge been tested on sites. None of these methods, including the use of ADDs, has been shown to be fully effective in the long term. Many authors suggest that a suite of anti-predator methods is necessary in most situations.

At least five different types of ADD are used in Scotland, but many more devices are available and may be marketed for other purposes. We have tabulated all devices that we are aware of as of 2013 within this review.

About half of all fish farm sites appear to use ADDs, but there is no register of which sites are using what devices, and little information on their effectiveness. Source levels, signal characteristics, duty cycles and modes of operation are all likely to have significant bearings on how effective they are and also on the extent to which they have an impact on non-target species such as cetaceans. Harbour porpoises are known to avoid areas where Airmar and Lofitech ADDs are being used, but the maximum range that cetaceans are likely to be impacted by these or other ADDs is not currently known.

ADDs have been used to deter some cetaceans and pinnipeds in capture fisheries, but with mixed success. Better success has been achieved with the use of low powered devices (pingers) to minimise the accidental entanglement of certain cetacean species, but these are typically neophobic species that are easily deterred, are not necessarily using the nets as a source of food and therefore lack motivation to stay near the sound source.

The use of ADDs to move animals away from pile driving and other potentially damaging industrial activities is also being developed. We discuss the acoustic characteristics of, and behavioural responses to, such sounds from a theoretical perspective, and summarise published trials of such mitigation activities. We note that some seals seem to have become habituated to ADDs used at fish farm sites, and point out that the use of the same devices at industrial developments therefore runs a risk of being counterproductive. We judge the potential for the success of aversive signals for mitigation to be high, but many details still need to be explored.

One specific industrial innovation that poses a potential risk of injury (collision) to marine mammals is the development of tidal turbine devices. There are several questions which need to be addressed in order to make a more informed assessment of the severity of animal-turbine collision risk. Specifically we need to know more about how regularly marine mammals use such sites, but also at what range they are likely to detect the noises made by tidal turbines. If acoustic deterrent devices are to be used in such situations, over the lifetime of the turbine, then more information will also be required on the responses elicited by the deterrent devices, how these may vary between species and contexts, and how such responses may change over time.

Ship strikes are a significant threat to some whale populations and are a concern for many others. It has been hypothesised that whales at the surface of the sea do not react to approaching ships because there may be an acoustic shadow directly in front of a ship which would conceal its approach. It has been suggested that forward projected aversive sounds could help minimise the risk of ship strikes. Some initial trials of such a device to protect manatees from approaching speedboats have shown some promise. Elsewhere there has been little enthusiasm for using acoustic deterrence to minimise whale - ship interactions, largely because it is unclear that such an approach would elicit the correct response from the animals concerned.

A number of concerns about the use of acoustic deterrent devices are also discussed. Several authors have noted a decrease in the responsiveness of animals to acoustic deterrence over time. This may be due to habituation, to hearing damage, or could represent learned strategies to avoid responding to the signals, or to reduce their effects.

Hearing damage has been widely speculated upon for animals that are frequently exposed to acoustic deterrent signals. It is thought that the cumulative exposure to sound energy (sound exposure level) is the appropriate measure of concern. Concerns over how sound exposure level thresholds might be set are discussed. It is important to know the target species' hearing sensitivity over the full spectrum of audible frequencies, but reliable audiogram data are not available for several key species. Temporary and Permanent Threshold Shifts in hearing are discussed and it is noted that one recent study suggests that porpoises may be most vulnerable to TTS at frequencies well below their peak hearing sensitivity.

The fact that ADDs deter animals from areas that they would otherwise use, suggests that habitat exclusion may also be a concern, though so far the exact extent of habitat exclusion has not been well defined for any species, nor are the impacts on individual foraging success understood, still less the population level consequences.

Throughout the report knowledge gaps are identified and these are summarised at the end of the report. From these knowledge gaps, ten general research recommendations are made; most of these are focused on concerns around aquaculture.