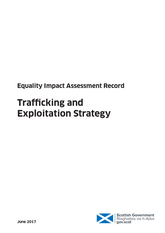 We are working in partnership with criminal justice agencies and support organisations to make Scotland a more hostile environment for trafficking and exploitation and to ensure that victims are given the support and assistance they need. The Human Trafficking and Exploitation (Scotland) Act 2015 ('the 2015 Act') includes provisions that require Scottish Ministers to prepare a trafficking and exploitation strategy, which sets out such actions, arrangements and outcomes as the Scottish Ministers consider appropriate in relation to the conduct which constitutes an offence under the Act.

The Strategy may set out:

The Strategy to which this EQIA applies has been developed in partnership with stakeholders such as local authorities, Police Scotland, the Crown Office and Procurator Fiscal Service and the NHS and was published on 30 May 2017

The purpose of the Strategy is to bring together and build on the work done by Scottish Government and partners, with an overall vision of eliminating human trafficking and exploitation

Who will it affect?

These outcomes might be prevented from being achieved through lack of resources, both human resources and financial resources.

The complex and international nature of the problem is difficult to combat.

Scotland has introduced a specific category of trafficking as an indicator of concern within the child protection system in order to better understand the number of children who are at significant risk of or who have been subject to trafficking. As this has only been recently introduced, no useable statistical data is available yet.

Scottish Guardianship Service worked 1:1 with 78 new children in 2016 and provided less comprehensive support to the 31 children moved to Scotland through s67 Immigration Act 2016. Currently 40% of all the children in the service have indicators of human trafficking

We are aware that there are adult victims of trafficking who are not referred to the NRM for a variety of reasons and the 2015 Act makes provision to seek to capture this data in order to get a more complete picture of human trafficking in Scotland.

There is also scope within the Strategy for partners to look more broadly at how data is collected.

This EQIA has been shared with stakeholders for their comments as part of the process to develop the Strategy.

Include here the results of your evidence gathering (including framing exercise), including qualitative and quantitative data and the source of that information, whether national statistics, surveys or consultations with relevant equality groups.

Stage 3: Assessing the impacts and identifying opportunities to promote equality

Having considered the data and evidence you have gathered, this section requires you to consider the potential impacts - negative and positive - that your policy might have on each of the protected characteristics. It is important to remember the duty is also a positive one - that we must explore whether the policy offers the opportunity to promote equality and/or foster good relations.

Do you think that the policy impacts on people because of their age?

Do you think that the policy impacts disabled people?

Do you think that the policy impacts on men and women in different ways?

Do you think that the policy impacts on women because of pregnancy and maternity?

Do you think your policy impacts on transsexual people?

Do you think that the policy impacts on people because of their sexual orientation?

Do you think the policy impacts on people on the grounds of their race?

Do you think the policy impacts on people because of their religion or belief?

Do you think the policy impacts on people because of their marriage or civil partnership?

If, following the impact analysis, you think you have identified any unlawful discrimination - direct or indirect - you must consider and set out what action will be undertaken to mitigate the negative impact. You will need to consult your legal team in SGLD at this point if you have not already done so.

The Strategy will be supported by an Action Plan, which will be taken forward in conjunction with stakeholders. In addition the Strategy is to be reviewed by Parliament every 3 years and an EQIA will be prepared for the review.

I am satisfied with the equality impact assessment that has been undertaken for the Trafficking and Exploitation Strategy and give my authorisation for the results of this assessment to be published on the Scottish Government's website.