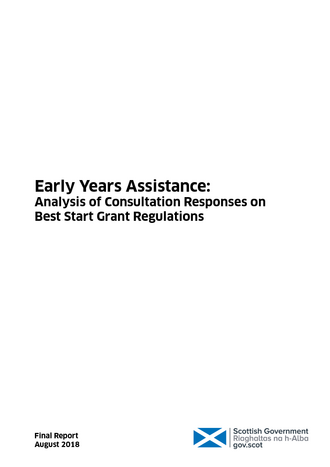 As a result of the devolution of powers to provide assistance for maternity expenses, Scottish Ministers are taking powers to provide Early Years Assistance which will be delivered in the form of a new benefit called the Best Start Grant ( BSG). This will replace and expand on the UK Government Sure Start Maternity Grant. In September 2017, the Scottish Government published a set of illustrative regulations [1] in relation to the Best Start Grant and the feedback received [2] assisted in the development of draft regulations and associated consultation questions.

The BSG aims to help support families who receive certain benefits, both in and out of work. The grant will provide a total of up to £1,100 for first children and £800 for subsequent children, with payments spread across three stages:

1. Maternity and New Baby Payment of £600 for a first child and £300 for any subsequent child;

The BSG is intended to improve children's wellbeing and life chances by providing support to lower income families at key transition points in the early years and, as such, aims to help mitigate the effects of child poverty and material deprivation. The support is also intended to contribute to improving outcomes for children, including reducing health inequalities and closing the attainment gap.

As part of its ongoing commitment to engage key stakeholders in the future development of social security in Scotland, the Scottish Government committed to lead and implement a series of social security related consultations. The consultation regarding the draft regulations for the Best Start Grant forms the third such exercise.

The consultation document set out information around the possible/expected implementation of the BSG, and included the draft regulations at Annex A. Views were sought from organisations and individuals in relation to whether the draft regulations would meet the policy aims, as well as on some specific points, including:

The consultation opened on 26 March 2018 and ran until 15 June 2018. This report explores the responses received and summarises the main observations from the consultation exercise.

A total of 51 substantive responses were received - 36 via the Scottish Government's online portal Citizen Space, and 15 by email. Overall, 19 were submitted by individuals and 32 came from organisations. The types of organisations who responded were split fairly evenly between local authorities (n=12) and charity/voluntary organisations (n=16), while a further four responses came from a range of other organisations, including Non-Government Organisations ( NGOs), NHS boards, and educational institutions.

The consultation included a total of 13 questions, each including one closed and one open question element. All questions were answered by at least one respondent.

All responses were read and logged into a database and all were screened to ensure that they were valid. One response was partly redacted due to inappropriate and offensive content. Closed questions were analysed to identify whether respondents were for or against particular proposals, or to identify preferred approaches. Qualitative comments given at each question were clustered based on their corresponding closed question responses for analysis purposes, and examined. These open questions tended to ask respondents to state the reasons for their views, or to explain their answers. The main reasons presented by respondents both for and against the various specific proposals were reviewed, alongside specific examples or explanations, alternative suggestions, caveats to support and other related comments.

Supporting verbatim quotes were extracted in some cases to highlight the main themes that emerged. Only extracts where the respondent indicated that they were content for their response to be published were used - four organisations/ individuals asked that their response not be published, 18 approved publication without reference to their name/affiliation, while 29 were content for all information to be published. For the purpose of this report, quotes are not attributed to specific organisations/individuals but rather are anonymised and attributed to respondent 'types'. Although some responses to individual questions suggested a level of misunderstanding and/or did not directly answer the questions asked, all feedback was analysed and is presented under the appropriate sections below.

Findings are presented as they relate to each consultation question. Where people provided no response, this is noted separately from cases where respondents indicated that they had no further comments.

Given the number of responses overall and per question, it was not possible to carry out any reliable disaggregate analysis to compare responses between 'types' of respondent. Instead, in any cases where individual respondents offered views that differed significantly from those submitted by organisations, this is picked up narratively in the report. Further, given the limited number of organisations who responded, it was not possible to conduct robust per question comparisons between the views of different sectors. That being said, little difference was noted between the views provided by individuals and organisations, or between the different organisational sectors, with the main sentiments at each question being expressed across the different respondent typologies.

Finally, it is worth stressing that the views presented here should not be taken as representative of the wide range of stakeholders invited to respond to this consultation, nor should they be generalised too broadly. They simply reflect the views of those individuals and organisations who provided a submission.