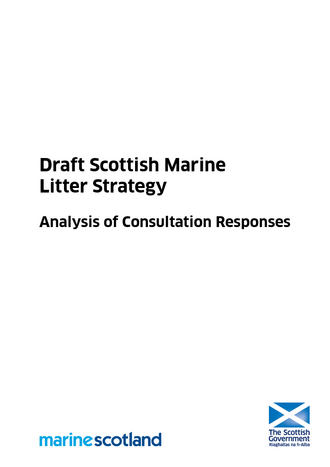 Marine litter poses a number of problems across the economy, environment and society. These detrimental effects include ingestion and entanglement of wildlife as well as wider ecosystem deterioration, public health issues and impacts on aesthetics and a wider range of economic impacts across those industries reliant on our coastal and marine environment.

The Scottish Government consultation response form set out all of the questions. The consultation document contained both closed and open questions. A number of organisations or groups also developed their own abridged versions of the consultation form. All responses received, in whatever format, were analysed with an overall aim of identifying key issues and ensuring that the full range of views was represented.

A total of 98 responses to the consultation document were received. These written responses have provided a range and depth of views on the draft Marine Litter Strategy which will help to shape the development of the final Strategy.

This report sets out the findings of the consultation responses that were submitted to the Scottish Government. The main aim of the analysis was to identify the key themes, as well as the full range of issues, raised by respondents in their comments on each question. The findings of the analysis are presented here on a question-by-question basis, in the sections which follow.

A summary of respondent views on the draft Marine Litter Strategy follows:

2. Consultation Responses and Approach to Analysis