Bonamia spp., including B. ostreae are protists (intrahaemocytic protozoa) of the phylum Haplosporidia that cause lethal infection of the haemocytes of certain oysters, and in the UK this is the European flat oyster, Ostrea edulis. Infection in oysters rarely results in clinical signs of disease, and the only visual cue is increased mortality. The disease can occur at any time of the year, although the prevalence and intensity of infection increase during the warmer months. In the northern hemisphere, prevalence is highest in September with significant mortality usually occurring at water temperatures of 12°-20°C. 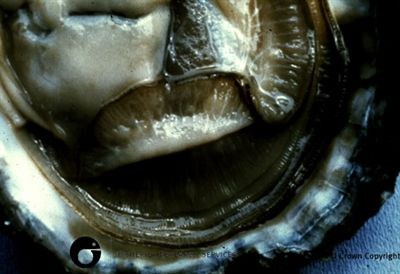 Bonamia ostreae occurs throughout Europe from along the coast from Spain to Denmark, localised areas in Ireland and Great Britain, and along the west (California and Washington) and east (Maine) coasts of the USA.

Many infected oysters appear normal; whereas other animals may show a yellow to black discolouration and/or extensive lesions (i.e. perforated ulcers) on the gills and mantle. However, all infections with haplosporidia have similar gross signs and presumptive / differential diagnosis requires histopathology. 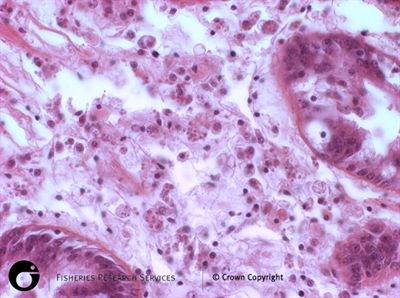 Bonamia ostreae measures 2-3 µm in diameter and occurs within the oyster haemocytes. Infection appears to be correlated to haemocyte destruction and diapedesis due to proliferation of B. ostreae. Lesions occur in the connective tissues of the gills, mantle and digestive gland. Some flat oysters die with light infections, and heavily infected oysters have a tendency to be in poorer condition than uninfected oysters. In early infections, B. ostreae are often associated with focal haemocyte infiltration in the connective tissue of the gill and mantle, and in the vascular sinuses around the stomach, digestive gland and intestine. Later infections will result in an increased number of infected haemocytes.