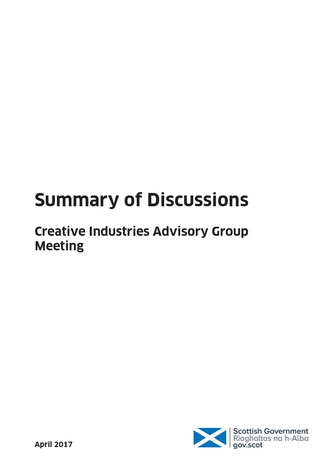 1.1 The meeting was opened by the Cabinet Secretary who explained that the Scottish Government is committed to developing Scotland's thriving creative industries and enabling them to grow. The Creative Industries Advisory Group ( CIAG) had therefore been established to create a space of open and honest dialogue about the issues facing the sector, and facilitate collaborative working between the public sector and industry to ensure the creative industries were being given the support they needed.

1.2 The Cabinet Secretary explained that she was keen to create the conditions for success by ensuring that public sector policies towards creative industries were aligned with business needs on the ground; while also considering how Government could support sector-led activity to promote and develop the industry.

1.3 The Cabinet Secretary introduced her colleague, Paul Wheelhouse (Minister for Business, Innovation and Energy), who spoke about the importance of the creative industries to the Scottish economy and the potential value in maximising the links with the entrepreneurship agenda.

1.4 Bob Last, Co-Chair, then made introductory remarks which highlighted that the CIAG agenda and discussions should be driven by the members. He noted that expectations were high for the Group, and having the opportunity to discuss issues of relevance to the sector was of real value. He suggested that the focus should remain on the achievable, and due account given to any necessary processes that would be needed to move issues forward.

2.1 The draft Remit and Terms of Reference were agreed on the following basis:

2.2 In terms of membership, it was agreed that attendance should be kept tight and focused but that others from across the creative industries could be invited to meetings to contribute specialist knowledge on an ad hoc basis depending on the themes of discussion.

2.3 It had been suggested to the Scottish Government that the minority language sectors (Gaelic and Scots) be represented on the group. The Cabinet Secretary wanted to keep the group as is for present but will ensure the interests of the minority language sectors - alongside the need to focus on emerging artists, makers and practitioners - are considered by the group as a whole.

Action: Secretariat to update Terms of Reference to reflect discussion.

3.2 In that context, there was a short discussion between Members and Mr Wheelhouse on what a more entrepreneurial society in Scotland might look like. It was acknowledged that many children of primary school age will grow up to work in jobs which don't currently exist and the aspiration that the power of the creative industries could be better harnessed to develop resilience and adaptability in society to cope with this change, as well as put us in the forefront of technological and design markets. Support for the textiles industry to tackle the challenge of strong competition from other parts of the UK was also discussed.

4. 'What is a Creative Entrepreneur?'

4.1 Members heard a presentation from Rachael Brown, the Chief Executive of the Cultural Enterprise Office who spoke about what creative entrepreneurship means in her experience and why people define themselves as such (the social, economic, cultural reasons which sets creatives apart from other entrepreneurs). Rachael also highlighted global trends with some international examples and spoke about the Scottish context.

6.1 In discussion, the following points were made:

6.2 In summarising the discussions, the Cabinet Secretary highlighted key themes to consider further were:

7. AOB and Date of Next Meeting

7.1 There were no other items of business.

7.2 The Cabinet Secretary asked Members to reflect on the discussions and consider what the group can achieve strategically and in what practical ways it could deliver drivers for change, both in the short and longer term. The group would also be asked in due course to consider what agenda items should be prioritised for the next meeting of the group.

7.3 The group will meet twice a year with the next meeting taking place in early-mid September 2017. Scottish Government officials will identify a suitable date and advise Members.