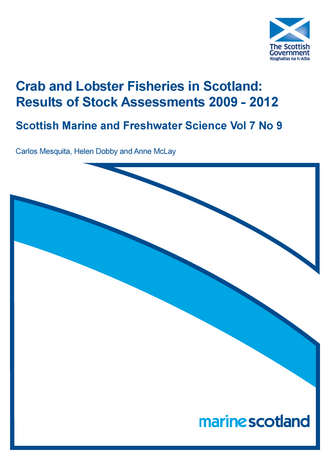 Crabs and lobsters are important species for the Scottish fishing industry. Although the total quantity landed is small relative to finfish landings, crab and lobster attain high prices. In 2012 the combined crab and lobster species landings of 14,000 tonnes had a value at first-sale of over £30M [1] (Scottish Government, 2013). The fishery is long established and was traditionally an inshore mixed species creel fishery, prosecuted by small vessels. However, improved technology and the ability to store and transport live animals in the 1980s led to the development of an offshore fishery for brown crab. This, and the development of new markets for both brown and velvet crab, has resulted in a substantial increase in the Scottish landings of both species over the last thirty years.

Creel fishing in Scotland continues today as an inshore fishery around most of the Scottish coast, with vessels setting their gear within a few miles from shore. The fishery is typically a mixed species fishery with both crab and lobster being targeted, albeit with some seasonal and regional variation. Most creel vessels are small, less than 10 m in length and with only one or two crew, and make short day trips to haul creels. However, a number of larger vessels now take part in an offshore fishery to the north and west of Scotland. These vessels, which are up to 18 m in length and have a crew of four or five, mainly target brown crab and carry vivier ponds on board to keep the catch alive. The size and power of these vessels enables fishing on offshore grounds such as the Papa and Sule Banks, with boats landing catch to ports such as Scrabster and Ullapool on a weekly basis. These 'vivier vessels' or 'super-crabbers' are fewer in number than the small day vessels but their catches represent over 50% of brown crab landings in some regions. Local processors were the preferred market until the overseas market emerged in the 1990s. By this time, technology had developed to enable the transport of live animals by vivier lorries (specially adapted lorries containing cooled ponds for the transport of live shellfish), within a day of landing. Today it is common for Scottish crabs and lobsters to be transported live to the continent, particularly Spain, where there is a good market. More recently, brown crab have also been exported to emergent Asian markets including China, where "dry transport" of live animals is the preferred method.

The most important crab species, in terms of weight and value, landed in Scotland is the edible or brown crab ( Cancer pagurus) which is found all around the Scottish coast. The second most important by landed weight is the velvet swimmer crab ( Necora puber). Velvet crabs were once considered to be a 'pest' species, and only a small scale fishery existed for a few months in the winter. The Scottish fishery expanded in the early 1980s following the collapse of the Spanish fishery (MacMullen, 1983), to become the largest in Europe (Tallack, 2002), although few fishermen fish solely for velvets. Other crabs landed include deep-water crabs ( Chaceon sp.), the northern stone crab ( Lithodes maja) and the shore or green crab ( Carcinus maenas), but these species only comprise a small proportion of the total landings ( Table 1).

The lobster most commonly landed in Scotland is the European lobster ( Homarus gammarus), a valuable species for which seasonal prices can be as high as £20 per kg at first sale. Other lobsters landed include the spiny lobster or crawfish ( Palinurus elephas), squat lobsters (family: Galatheidae) and the Norway lobster ( Nephrops norvegicus), also known as langoustine or Nephrops. In Scottish waters P. elephas is caught mainly on the west coast and along the north coast to Orkney and Shetland. Landings into Scotland up to 1998 were consistently over 30 tonnes dropping to an average of around 6 tonnes over the last 10 years. Nephrops stocks are assessed by ICES (International Council for the Exploration of the Sea) working groups and managed under the EU Total Allowable Catch ( TAC) system and are not considered further in this report.

In Scotland, vessels fishing for brown crab, velvet crab, spider crab, green crab, lobster or crawfish must have a license with a shellfish entitlement. The quantities that are permitted to be landed are not restricted. Owners of vessels of length 10 m & under with a shellfish entitlement are required to complete the FISH1 form for all landings of lobsters and crabs and submit it on a weekly basis to the Fishery Office at which the vessel is administered. For vessels of length over 10 m, data on fishing activity by trip must be recorded in a EU logbook and submitted to the Fishery Office within 48 hours of landing. Licensed fishing vessels which do not hold a shellfish entitlement are allowed to land a maximum of 5 lobsters and 25 crabs per day. No licence is required to capture crabs and lobsters in recreational fisheries and there is no recreational catch limit.

There is currently a restrictive licensing system, whereby no new licenses and entitlements are being granted. There are, however, some non-active (latent) licence entitlements which mean that there is the potential for the number of vessels fishing for crab and lobster to increase. A working group was recently established within the European project ACRUNET (A Transnational Approach to Competitiveness and Innovation in the Brown Crab Industry) to produce an analysis of latent capacity and the implications for the management of the brown crab fisheries. It became clear that in most countries there is significant latent capacity that could potentially target brown crab, but the likelihood of currently unused shellfish entitlements becoming active could not be estimated at the time.

The crab and lobster fisheries are not subject to EU TAC regulations or national quotas, although there are EU measures to restrict effort. Under EU Regulations, the annual fishing effort of UK vessels over 15 m participating in the brown crab fishery is restricted to 702,292 KW days in ICES areas V and VI and 543,366 KW days in ICES are VII (Council Regulation ( EC) No 1415/2004).

Minimum landing size ( MLS) regulations designed to protect juvenile animals apply to the main commercial crab and lobster species. These are summarised in Table 2. The MLS for velvet crab and lobster in Shetland was set under Shetland's Regulating Order ( RO) for the management of shellfish resources (The Shetland Islands Regulated Fishery (Scotland) Order, 1999). Further regulations in the crab and lobster fishery, including the Shetland Regulating Order, are described in detail in previous assessment reports (Mill et al., 2009; Mesquita et al., 2011).

This report presents summaries of historic and recent landings data and the results of stock assessments for brown crab, velvet crab and lobster, based on data collected between 2009 and 2012. A description of the biology, habitat and life history of these species is provided in Mill et al., 2009.