Foreword By The Cabinet Secretary for Justice 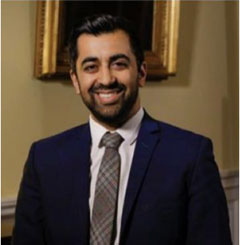 Domestic abuse is an appalling experience that can shatter the lives of families, damage health and well-being and restrict freedom to live a safe and fulfilling life.

Earlier this year, the Scottish Parliament passed the Domestic Abuse (Scotland) Act 2018 which creates a new specific offence of domestic abuse, covering physical abuse but also other forms of psychological abuse and coercive and controlling behaviour, bringing clarity for victims so they can see explicitly that what their partner or ex-partner has done to them is wrong and helping ensure perpetrators can be held to account under the criminal law.

Research by Scottish Women's Aid on homelessness and domestic abuse highlights that it a significant cause of homelessness in Scotland. It was also noted during the passage of the Domestic Abuse Bill through Parliament that it can be very difficult for those suffering or at risk of suffering from domestic abuse, the majority of whom are women often with caring responsibilities for children, to remain in their own home when attempting to leave an abusive partner.

That is why in our Programme for Government in September, we committed to consult on the creation of new protective orders in this area and on whether any changes are needed to the existing provisions on exclusion orders. This consultation meets that commitment.

In contrast with existing civil measures such as interdicts and exclusion orders, the new protective orders we are consulting on would mean the person at risk is not required to make the application to the court themselves for one of these protective orders. This may be key to ensuring the safety of a person at risk where the effect of abuse is such that that they are not in a position to initiate civil proceedings to remove the person putting them at risk from their home, because, for example, they are being controlled to such an extent that they could not initiate a court action. It would provide them with time to seek advice on their longer-term housing options and reduce the risk that they have to become homeless to escape the perpetrator.

The consultation seeks views on a number of policy issues concerning how such new protective orders would work if introduced in Scotland and whether any changes are needed to exclusion orders. We are particularly interested to hear your views on how the new protective orders can best be implemented in a way that ensures they are an effective tool to protect people at risk of domestic abuse.

I encourage all those with an interest to take the time to consider and offer your views on the proposals contained in this paper.