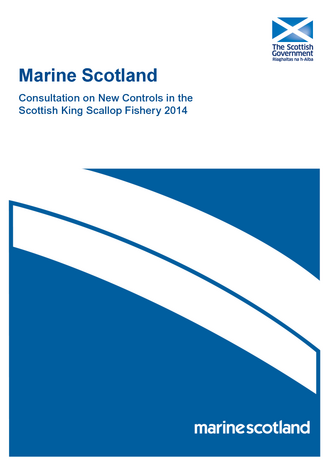 This consultation seeks views on new management measures in the Scottish king scallop ( Pecten maximus) fishery. The issues on which views are sought are:

The overall aim of these management proposals is to improve the management of effort in the fishery after an expansion in recent years and to attempt to increase the spawning stock biomass of the stock.

These proposals are informed by the report A Review of the Scottish Scallop Fishery carried out by Poseidon Consultants which investigated the scallop fishery in Scotland and made proposals around governance. The review can be accessed here: http://www.scotland.gov.uk/Resource/0045/00450683.pdf

The scallop fishery is highly important to Scotland with landings into Scotland worth £23 million last year. During the course of 2013, 86 vessels with a scallop entitlement prosecuted the fishery but nearly double that number have an entitlement allowing them to join the fishery in future.

Marine Scotland Science conducts regional stock surveys around the Scottish coast. The latest available assessments show that the health of the fishery varies around the coast. However, their recommendation for most areas is that fishing mortality should not increase and, at least for some areas, that management measures are taken to cut fishing mortality and increase the spawning stock biomass (the total weight of the fish in a stock that are old enough to spawn).

These measures fit with the Scottish Government's aim of having a well-managed and profitable scallop sector that helps support our coastal communities and encourages sustainable practises.