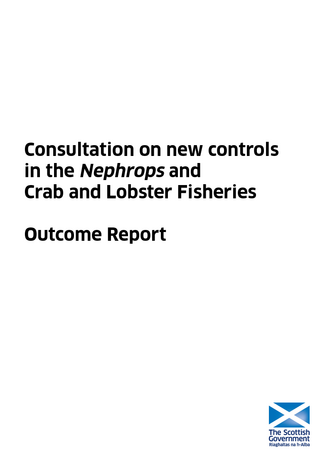 1. This document analyses responses to Marine Scotland's Consultation on new controls in the Nephrops and Crab and Lobster Fisheries. A copy of the consultation can be found at http://www.scotland.gov.uk/Publications/2012/08/7352/0. The consultation sought views on:

2. More precisely, feedback was requested on the following questions:

3. We issued the Consultation on new controls in the Nephrops and Crab and Lobster Fisheries on 7 August 2012. The consultation closed on 30 October 2012.

4. There were 110 responses, with the majority coming from private individuals, which made up 69 per cent (77) of the total. Twenty per cent (22) were from fishermen's associations. Five per cent (5) were from environmental organisations. Four per cent (4) were from processors and the remaining two per cent (2) were from local authorities.

6. On Friday 5 th October 2013, an errata to the original consultation document was issued correcting references, on pages six and nine, relating to the sustainability of crab and lobster fisheries in Scottish waters. We would like to apologise for any inconvenience caused.

7. Respondents were mixed in their support for the proposed changes, but clear themes emerged:

8. Though many who responded were opposed to any form of creel limits, some who opposed stated that their position may change if creel limits were to form part of a package of management measures including spatial management.

10. In light of the consultation responses, we have considered a range of issues including: potential environmental benefits; gear conflict aspects and enforcement and compliance challenges. Our conclusion is that, given the lack of evidence to support the view that limiting creel numbers on its own would help improve stock status, reduce gear conflict and in view of the major challenges attached to effective enforcement of any such scheme (particularly given the lack of support from most stakeholders) we do not propose, at this time, to introduce any new measures in accordance with questions 1 - 16.

11. However, although the majority of respondents were against national creel limits as proposed in the consultation, we note there were some regions which supported such measures. We would therefore be supportive of any region or area that wished to investigate the introduction of a local scheme through their IFG (Inshore Fisheries Group). These could potentially be run as research pilots to test out the feasibility and effectiveness of such schemes.

12. In addition to responses on the sixteen questions posed, we received other comments and general opinions on how the creel fisheries operate and are regulated. We have undertaken an analysis of these and identified two key, recurring issues which require further policy consideration:

14. In response to these concerns, Marine Scotland Compliance continues to receive and collate intelligence relating to alleged unlicensed fishermen. This is built into their risk assessments and associated tasking, alongside work on other alleged offences. If their on-going work suggests to Marine Scotland that unlicensed fishermen are a significant problem around the Scottish coast, we will consider whether to take forward further measures. There has also been a drive to improve the general understanding of who can legally buy and sell seafish through a poster campaign conducted through Fishery Offices.

15. There was also a strong body of opinion in favour of action against the landing of berried lobster hens, including suggestions for consideration of an outright ban. The landing of berried lobsters was previously banned in the UK but this was repealed due to the significant control and monitoring issues it created. The v-notching scheme, where berried lobsters are marked and then returned to the water, is one way in which fishermen can ensure that egg-carrying females are returned to the sea.

16. Marine Scotland wants to support fishermen with v-notching schemes, where they are thought necessary, and we will encourage this through IFGs. IFGs should consider whether a v-notching programme is appropriate for their area, or if there is a danger that such schemes could result in a gender imbalance in their lobster populations. If requested by IFGs, Marine Scotland will make funding available for the purchase of v-notching clippers.