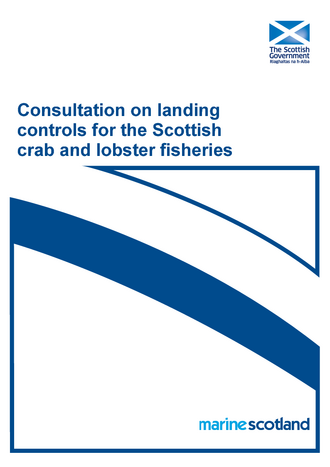 Scotland’s fishing industry is an important part of rural life, making a valuable contribution to the economy, and is woven into the country’s culture and heritage. Fisheries are at the heart of the Scottish Government’s aims to create more, better paid jobs in a strong sustainable economy, and to build a fairer Scotland through tackling inequalities and empowering people and communities.

Scotland’s brown crab, velvet crab and lobster fisheries are of great importance to many of our coastal communities with landings worth £32 million being recorded in 2014.

However, around much of the Scottish coast, these stocks are estimated to be fished at levels close to or above the F MSY proxy (F MSY is the fishing mortality consistent with the largest average yield that can continuously be taken from a stock under existing environmental conditions).

The Scottish fishing industry has expressed growing concern at the health of these fisheries and called for their management to be improved. Through their local management bodies, the island communities of Orkney, the Outer Hebrides and Shetland have already brought forward proposals which have resulted in the introduction of individual management arrangements for their crab and lobster fisheries.

Marine Scotland is seeking views on landing controls that it proposes to introduce throughout the rest of the Scottish coast. These proposals are as follows:

These proposals contribute towards one of the key aims of Marine Scotland's Inshore Fisheries Strategy, by ensuring that Scotland’s inshore fisheries are sustainably and effectively managed.