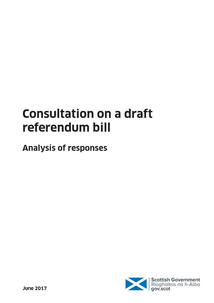 Consultation on a Draft Referendum Bill – Analysis Of Responses

The Government have this afternoon published the Analysis of the Responses to the Consultation on Draft Referendum Bill, which can be found at http://www.gov.scot/publications/consultation-draft-referendum-bill-analysis-responses/. The consultation responses have also been published.

That draft bill was the subject of a public consultation that closed earlier this year. The responses to the consultation have been independently analysed, and the report of that analysis will be published this afternoon.

“On almost every measure of participation the referendum exceeded anything we have seen before and people overwhelmingly said they found the experience of voting positive. This is thanks to the commitment and hard work of those running the referendum, but it also provides a lesson in how to legislate and plan for referendums that policy makers across the UK should learn from.”

Voters also reported positive experiences of the poll, with 94% of those who voted in a polling station expressing satisfaction with the voting process.

The Electoral Commission’s report on the 2014 referendum also evaluated the conduct of the referendum in considerable detail and provides additional background on a number of matters covered in the consultation analysis.

The Scottish Government is grateful for the over 7500 responses to the consultation. Detailed responses were also received from organisations with a specific interest in electoral administration, including the Electoral Management Board for Scotland.

As set out in the independent analysis, comments were received on a wide range of topics including electoral administration, franchise, and campaign rules. Many respondents acknowledged the robustness of the current arrangements and there were also useful views put forward about how arrangements could be further strengthened.

This was of course a consultation on technical aspects of the Bill, such as the detailed conduct and campaign rules needed to run a referendum. It did not cover matters such as the date or timing of a referendum, which would be for the Scottish Parliament to consider in the event a referendum bill was introduced.

On 27th June, the First Minister confirmed that the Scottish Government does not intend to introduce legislation for an independence referendum immediately. The Scottish Government remains committed, strongly, to the principle of giving the people of Scotland a choice at the end of the Brexit process – when clarity on the outcome has emerged. When the terms of Brexit are clearer, we will come back to parliament to set out our judgement on the best way forward, including, our view on the timescale for offering people a choice over Scotland’s future.

It will be important for the Scottish Government to take due account of the consultation responses received in the development of future legislation, and also for the Scottish Parliament to do so in scrutinising the legislation. This will help to ensure that public trust in the electoral system and understanding of the provisions set out in the bill is enhanced.