Contents
Consultation on a Draft Code of Practice for Stop and Search: Analysis of Responses
Executive summary 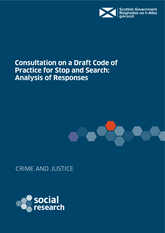 1. Between 21 March and 15 July 2016, the Scottish Government undertook a public consultation on a draft Code of Practice ('the Code') to underpin the use of police powers to 'stop and search' in Scotland. [1] The consultation received 38 responses from a range of organisations and individuals.

4. The consultation issued by the Scottish Government in March 2016 follows on from the work carried out by the Independent Advisory Group, which recommended that its draft Code of Practice be put out to consultation prior to adoption. [2]

5. The consultation paper contained a copy of the draft Code along with eight questions focusing on the possibility of including a statement on the purpose of the Code, the option of including sections on children and young people and adults at risk and vulnerable adults, local scrutiny, and information recording with regard to section 67 searches ( i.e. those undertaken as part of the entry requirement for public events). [3] It also invited more general views on the Code as a whole.

7. Main findings from the consultation are summarised below.

The purpose of stop and search

8. There was a clear view amongst respondents that the Code should contain a statement setting out the purpose of stop and search. Organisations were unanimous on this point, believing that this was needed for reasons of clarity, public understanding about the use of the tactic and its limitations, and public confidence. Further, there was a view that the inclusion of such a statement of purpose would demonstrate a commitment to using the power fairly and to good effect for the benefit of the community.

9. Respondents offered two views on what the purpose of stop and search should be, with slightly different emphases. These were as follows:

10. Others, however, focused on practical operational issues and thought the purpose of stop and search should be to safeguard communities by identifying and removing from the public domain potentially harmful items such weapons, drugs (including alcohol) and drugs paraphernalia, and other items linked to criminal activity.

11. There was significant support for the Code to contain a section on children and young people. Respondents thought this would:

12. This would, in turn, contribute to maintaining good community relations and ensuring that children and young people do not become alienated or criminalised.

13. Two respondents thought a specific section would be particularly important if the police were granted new powers to search children and young people for alcohol.

14. Those opposed to or expressing reservations about a separate section argued that everyone should be treated the same regardless of age, or that the treatment of children and young people by the police should be addressed through education and training rather than via an 'additional policy'.

15. Respondents noted both principles and specifics in discussing the content of a section on children and young people. Respondents called for a section with a strong 'rights' basis with priority given to protecting the wellbeing of the child or young person involved. They also stressed the importance of addressing the following in the Code:

Vulnerable adults and adults at risk

17. There was also support for a separate section on adults at risk and vulnerable adults. Respondents thought that this would be valuable for informing operational practice: it would help ensure that officers were aware of the needs of adults at risk and vulnerable adults, and followed appropriate principles and practice in dealing with such individuals.

19. Respondents suggested a range of issues that the section should provide guidance on. These included the communication needs of vulnerable adults and adults at risk; assessing risk; and involving other services.

20. Other more specific suggestions for procedures for searching this group related to the role of senior officers; the involvement of appropriate adults / relevant authorities; the training of officers; referrals to other services; and recording requirements.

21. Respondents were largely in favour of including a section in the Code on local scrutiny, suggesting that this would:

22. Those who did not support a separate section felt that current arrangements for local scrutiny of police activity should apply and, as such, there was no need for this to be covered in the Code. There was an additional concern that inclusion in the stop and search Code could, in fact, lead to confusion on this point.

23. Those who endorsed the use of existing local arrangements argued that local scrutiny boards were a well-established statutory vehicle which provided the opportunity to hold senior police personnel to account. They involved local stakeholders and elected representatives, were accessible to the public, and had access to relevant information.

24. Those who had reservations about using existing arrangements thought that local boards were too close to the police and did not reflect the communities affected by stop and search.

26. Although not all respondents agreed with the need for a separate section in the Code, there was, nevertheless, widespread endorsement of the importance of local scrutiny of stop and search activity. In addition, good quality information, statistics and analysis were seen to be essential for monitoring and scrutiny. It was also agreed that information and statistics on stop and search should be published.

Recording of information on section 67 searches

27. Two-thirds of respondents supported recording information about 'section 67 searches' ( i.e. those carried out at public events as a condition of entry). Some respondents did not see any justification for excluding any particular type of search - they thought recording of searches was important for scrutiny reasons and did not think issues of 'practicality' were sufficient reason for recording of information to be deemed disproportionate. These respondents mainly favoured the collection of full information, although some thought that event-level summary information would be sufficient.

28. Those who thought that section 67 searches should be treated as exceptions generally referred to the specific demands of public event environments in their response. They felt that searches at public events were reasonable, and that recording of information would be impractical given the large numbers of people involved and the potential adverse impact on the smooth and safe running of events. There were however, two qualifications noted to this view: that summary information might be recorded for operational review reasons; and that basic demographic information might be recorded in circumstances where attendees were selected for searching (as opposed to a situation where all attendees were searched).

29. Respondents offered varied comments on how the Code might help promote community wellbeing and provide confidence that stop and search is being used with due consideration to fairness, integrity, respect and human rights. Common themes in the responses are summarised below:

30. Human rights and equalities: The importance of respecting human rights and the needs of different equalities groups was affirmed by respondents. Some offered detailed comments and suggestions with the overall aim of enhancing, protecting or promoting the rights of communities and individuals. Others, however, praised the human rights based approach taken in developing the Code.

31. Rights of those stopped and searched: There was a clear view among respondents that the Code should include more guidance on providing those stopped with information about their rights, including the right to complain.

32. Availability and accessibility: Respondents stressed the importance of the Code being widely available and easily accessible to the wider community (in police stations, online, etc.). They thought the Code should be produced in accessible language suitable for all ages, with consideration given to producing easy-read and summary versions, and versions in other community languages.

33. Monitoring: Respondents stated (or restated) the importance of data collection, analysis and publication in monitoring the use of stop and search, and emphasised the importance of being able to disaggregate data by protected characteristics to ensure that particular groups are not being targeted disproportionately.

Other suggested changes to the Code

34. Respondents offered a wide range of very individual and specific points about different aspects of the Code. The comments included calls for clarification on specific points, and made reference to the potential operational difficulties of particular statements. A small number of respondents (including those representing Police Scotland and the Scottish Police Federation) made multiple and detailed comments about the practical use of the Code in particular situations. All the detailed comments made by respondents have been collated in a separate document (available on the Scottish Government website), and will inform the further development of the Code of Practice.