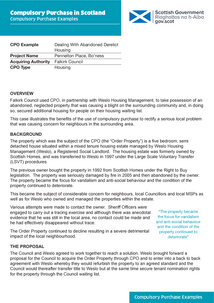 Falkirk Council used CPO, in partnership with Weslo Housing Management, to take possession of an abandoned, neglected property that was causing a blight on the surrounding community and, in doing so, secured additional housing for people on their housing waiting list.

This case illustrates the benefits of the use of compulsory purchase to rectify a serious local problem that was causing concern for neighbours in the surrounding area.

The property which was the subject of the CPO (the "Order Property") is a five bedroom, semi detached house situated within a mixed tenure housing estate managed by Weslo Housing Management (Weslo), a Registered Social Landlord. The housing estate was formerly owned by Scottish Homes, and was transferred to Weslo in 1997 under the Large Scale Voluntary Transfer ( LSVT) procedures

The previous owner bought the property in 1992 from Scottish Homes under the Right to Buy legislation. The property was seriously damaged by fire in 2005 and then abandoned by the owner. The property became the focus for vandalism and anti-social behaviour and the condition of the property continued to deteriorate.

This became the subject of considerable concern for neighbours, local Councillors and local MSPs as well as for Weslo who owned and managed the properties within the estate.

Various attempts were made to contact the owner. Sheriff Officers were engaged to carry out a tracing exercise and although there was anecdotal evidence that he was still in the local area, no contact could be made and he had effectively disappeared without trace.

The Order Property continued to decline resulting in a severe detrimental impact of the local neighbourhood.

The Council and Weslo agreed to work together to reach a solution. Weslo brought forward a proposal for the Council to acquire the Order Property through CPO and to enter into a back to back agreement with Weslo whereby they would refurbish the property to an agreed standard and the Council would thereafter transfer title to Weslo but at the same time secure tenant nomination rights for the property through the Council waiting list.

The Council undertook to fund the acquisition process from its Housing Investment Programme and to meet all compensation due.

Weslo undertook to meet the costs of the substantial refurbishment required to bring the property back to a habitable condition.

By May 2013, at the end of the statutory notice period, no objections had been received. The CPO and accompanying documents sent to Scottish Government for confirmation. The Order was confirmed by Scottish Ministers in September 2013. Consequently, statutory notices of the Confirmed Order and intention to acquire the property by GVD were advertised in local press, delivered to the Order Property and affixed to the Order Property. The title of the property was issued in name of Falkirk Council in February 2014.

Although the Council made efforts to identify the owners of the property, it was not until June 2014, that the former owner made contact with the Council. At this point, the Falkirk Council agreed to pay the balance of compensation due.

In March 2016, Missives concluded with Weslo Housing Management taking ownership of the property.

Following renovation works, a family nominated from the Falkirk Council's waiting list took up tenancy of the property.

The Order Property had become the focus of anti-social behaviour and the disappearance of the owner rendered it extremely difficult to address the obvious issues by any other legal means.

By working collaboratively with Weslo on the back to back agreement, underpinned by the use of compulsory purchase powers, the Council was able to alleviate the problem, improve the amenity of the area and the lives of the neighbouring owners and tenants.

Whilst the confirmation of the CPO itself was relatively straightforward, there were several unusual aspects which had to be considered e.g.

1. A missing owner who had walked away from the property after it was damaged. With this we were faced with carrying out searches via information in Council databases and using tracing agents and Sheriff officers to ensure that we were making all reasonable enquiries

3. A Heritable Creditor who was taking no active steps to protect their investment

4. Service of notices affixed to the Order Property as well as more conventional methods

5. Parallel process of agreeing terms with Weslo in terms of the back to back agreement and ensuring commitments before embarking on the CPO process

7. Re-emergence of the former owner. This came about as result of a relative visiting the property and seeing the affixed notice. After discussion the compensation figure net of the payment to the Heritable Creditor was paid to the former owner. In effect the intervention of the Council had also relieved the owner of the daunting prospect of trying to deal with what had become a major liability.

Although not without its challenges, the use of Compulsory Purchase in this case had a very positive outcome for all of the affected parties and the wider community.