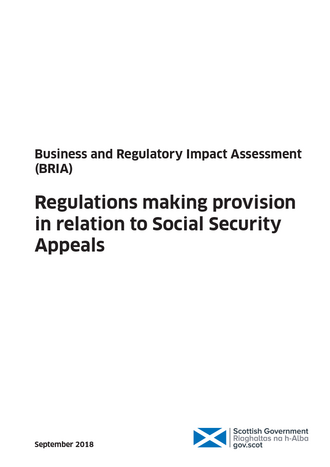 The then Cabinet Secretary for Communities, Social Security and Equalities statement to Parliament on 30 May 2017 set out that the Scottish Government will begin to deliver the first wave of benefits Best Start Grant and Funeral Expense Assistance by summer 2019. The First Minister announced on 4 September in the Programme for Government that the first benefit to be delivered by Social Security Scotland (the agency) will be Best Start Grant ( BSG). The agency will start making payments for BSG by this Christmas.

The Scottish Government is introducing a different approach to decision making and appeals, one which aims to get decisions right first time. It is taking a rights based approach that respects the dignity of the individual. The Scottish Government has always been clear that people will have a right to challenge if they believe that the new agency, Social Security Scotland, has not made the right decision and that the process for challenging a decision is as simple and straight forward as possible.

To ensure an individual is able to challenge the decision of the agency through an independent institution, Scottish Ministers decided that a new chamber of the First-tier Tribunal for Scotland will be created to hear appeals in relation to social security cases in the Scottish system. This was decided against the background of discussions that are currently taking place with the UK Government on the transfer of responsibility for the operation and management of reserved tribunals, including the Social Security and Child Support Tribunal, in terms of changes to the devolution settlement brought about by the Scotland Act 2016. The transfer will not take place prior to the first wave of social security benefits being delivered and it has therefore been necessary to set up a new chamber of the First-tier Tribunal for Scotland.

Connected with the regulations being made under the 2014 Act, there will also be a short set of regulations made under ancillary powers in the Social Security (Scotland) Act 2018. These will enable a scheme to be set up for payment of travel and subsistence (T&S) expenses and, where appropriate, payment of allowances towards loss of remunerative time. The Scottish Courts and Tribunals Service ( SCTS) will run the scheme.

This Business and Regulatory Impact Assessment ( BRIA) covers the group of tribunal regulations and procedures required by legislation to create the FtT and the UT.

There was cross Department working with those with an interest, mostly tribunals policy in Justice Directorate and the Social Security Policy Directorate.

In embarking upon the process of drafting the necessary regulations for consultation, the starting point (particularly in the context of the rules of procedure for the Social Security Chamber) was to look at the approach of the rules of procedure of the existing chambers of the First-tier Tribunal for Scotland. A key consideration was ensuring so far as appropriate the aim of having broad uniformity of approach, across the chambers in Scotland. These were considered alongside the rules of the Social Entitlement Chamber (the 2008 Rules) which currently deal with social security appeals for the reserved benefits in Scotland. The regulations as consulted upon were framed with the overall principles of the Scottish social security system in mind, to establish what adjustments might be needed.

This process has been supported through the Judicial Reference Group ( JRG). JRG has been established under the direction of the President of the Scottish Tribunals to provide advice, guidance and support in establishing the new Chamber.

Scottish Government engaged with and sought the views of the following groups:-

There were no commercial enterprises recognised as having an involvement with setting up the rules of procedure for the FtT or UT. No Charitable institution or other representative group made comment regarding any impact operationally or financially upon themselves.

Option 3 – Create a completely new set of regulations and procedures.

It is expected that the introduction of the Regulations could cause additional requests for information from existing advice services. This is because two types of systems will be operating – one about benefits that remain reserved to the UK Government and one about those for which responsibility is being devolved to the Scottish Ministers. There are differences between the two systems and it is likely that organisations that support individuals may be called upon to help explain where an individual will need to direct their case and provide the necessary advice.

Option 1 – Administratively easiest, requiring little consultation thus there are time savings in this option. This option does not ensure the flexibility required to reflect the aims of the 2018 Act which introduced a significantly different approach to appeals from the existing Department for Work and Pensions system.

Option 2 – This, preferred option, allows for better tailoring of the regulations and procedures to the 2018 Act. Furthermore this approach provides the opportunity to co-design and deliver an appeals process that meets the vision of a rights-based system founded on the principles of dignity, fairness and respect .

Option 3 – While this would give rise to regulations entirely consistent with the 2018 Act it would be time consuming and inefficient given that there are existing tribunal regulations that can be shaped, with amendment, to the intended purpose. The lead time for entirely new legislation, involving considerable consultation amongst various parties would be an unnecessary risk factor.

Option 4 – This option would not fulfil the legislative requirement to create and have in operation the FtT and UT to hear appeals.

The Scottish Government Social Security Directorate, as the commissioning agent for the Social Security Chamber, has agreed to fund SCTS to create and maintain the appeal Tribunal.

In so doing, an in principle agreement for funding has been established whereby SCTS will plan for budgets requirements and align this planning to the Scottish Government's bi-annual Budget Review process. This work is ongoing and there is no final agreement on costs at this time.

It is envisaged that the only costs that may be incurred are the procurement requirements that potentially may arise as a result of these regulations in the need for the provision of interpreters. As that is an operational matter for SCTS, it will be expected to follow its own procurement guidelines.

It is anticipated that advice providers may, initially, incur some cost at the introduction of the new appeals process, principally in advising how the system will work but that will be balanced as the agency takes up facilitating the appeal and collating the required information for forwarding to SCTS, relieving advice providers of that requirement.

Scottish Government officials have consulted with a range of third sector organisations affected by the new legislation, including on any concerns or benefits to their organisations. The duties in the regulations fall on the SCTS to provide the administrative functions in the creation of a new chamber to hear social security appeals. There is a new duty on the SCTS to handle the appeal process. Scottish Government officials are working closely with SCTS to facilitate this new duty. There is therefore no impact on Scottish firms.

The Scottish Government does not believe that the Tribunal Regulations will have an adverse impact on the competitiveness of Scottish companies or the third sector within the UK, Scotland or elsewhere in Europe or the rest of the world. Additionally the Scottish Government does not expect there to be any significant impact on the operational business of local authorities or health boards as a result of introducing this provision.

The appointment of legal and non-legal (ie ordinary) members will be subject to a Judicial appointments process, which is undertaken by the independent Judicial Appointment Boards for Scotland ( JABS). JABS will make recommendations to Scottish Ministers who will then make the appointments. As such, this is a statutory function and can't be undertaken by anyone other than JABS, within the UK, Scotland or elsewhere in Europe or the rest of the world. Additionally the Scottish Government does not expect there to be any significant impact on the operational business of local authorities or health boards as a result of introducing this provision.

No new business forms will be brought in with the implementation of the proposed legislation.

The right to appeal to the FtT is provided for in the Social Security (Scotland) Act 2018. The Scottish Government does not expect any new impact as a result of implementing Tribunal Regulations and underlying procedures on the legal aid budget .

Legal Advice and Assistance will continue to be available to individuals through the statutory scheme of Advice and Assistance and Civil legal aid. Advice and assistance would be available as currently to enable solicitors to provide various forms of legal advice and assistance short of representation on social security appeals, such as initial advice on whether there is a stateable case to take forward, advice on options to proceed, negotiating a settlement, or writing letters on the applicant's behalf. Assistance in the form of representation would not be available in the first tier tribunal, but Civil legal aid is available for an onward appeal to the UT dependent on eligibility.

Legal Advice and Assistance would remain subject to eligibility testing dependent on the type of assistance sought. This may include financial eligibility testing based on the "disposable income" and "disposable capital" of the applicant. However, where a person receives certain means-tested benefits (such as income support and job seeker's allowance) they will be automatically eligible for legal assistance. Certain other benefits, such as Personal Independence Payment, are not considered to be part of a person's disposable income.

The 2014 Act requires that the Regulations are consulted upon with the President of the Scottish Tribunals and, in some cases, approved by the Lord President, before they can be laid in Parliament. The regulations have been amended following a consultation process which includes the statutory requirement under 2014 Act, a public consultation and feedback from the Social Security Committee.

There are no sanctions associated with the regulations.

Monitoring of the fitness for purpose of the regulations will be reported upon by the SCTS as the tribunals start hearing appeals.

Scottish Government working with SCTS will set up a new Chamber in the First tier of the Scottish Tribunals that will hear devolved assistance appeals when the first wave of appealable social security assistances are delivered.

The group of regulations listed in the Proposal required to achieve this aim will be laid in Parliament in September 2018 to come into force by November 2018 in time for the delivery of the first appealable assistance.

SCTS, through ongoing engagement during the phased introduction of the devolved benefits, will provide feedback on the efficiency of the regulations.

Audit Scotland will monitor and report on the delivery of the social security system, including Social Security Scotland.

Option 2 is the recommended option, allowing for better tailoring of the regulations and procedures to the 2018 Act in the most timely and cost efficient manner.

As part of a wider process, the 2018 Act itself and the implementation of the Act, the regulations reflect Scottish Ministers vision of a rights-based system founded on the principles of dignity, fairness and respect.

The Cabinet Secretary or Minister responsible for the policy (or the Chief Executive of non departmental public bodies and other agencies if appropriate) is required to sign off all BRIAs prior to publication.

I have read the Business and Regulatory Impact Assessment and I am satisfied that, given the available evidence, it represents a reasonable view of the likely costs, benefits and impact of the leading options. I am satisfied that business impact has been assessed with the support of businesses in Scotland.