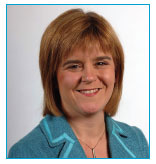 I launched the discussion about Better Health, Better Care in August 2007 with a group of patients, carers and their representatives in Glasgow. I promised them an Action Plan that would put their interests and their concerns at the centre of all that we do to improve health and health care in Scotland. This document begins to deliver on that promise.

I have been delighted by the response to the discussion paper. We saw over 2000 people face to face and received nearly 600 submissions. We made a specific effort to ensure that we heard views that reflected the diversity of Scotland's population.

We heard from the citizens of Scotland about the importance of communication, participation, being listened to and having the opportunity to play a stronger part within the NHS. For staff, the key issues were about feeling valued and there was a strong sense that we seemed to be heading in broadly the right direction. For Boards, there was a wish for clarity about priorities and about stability. They want to be part of shifting care into communities, in raising quality and in reducing inequality. The Action Plan is built around those aspirations.

There is much to be proud of in our National Health Service. We have strong foundations on which to build as we seek to improve health in Scotland.

But I have been clear since taking on this position, that the best way to make progress on health and health care is by galvanising the people of Scotland with new rights and responsibilities. That is why this document sets out a new vision for the NHS. That vision is based on a shift from the current position where we see people as "patients" or "service users", to a new ethos for health in Scotland that sees the Scottish people and the staff of the NHS as partners, or co-owners, in the NHS. I want us to move to a more mutual NHS where partners have real involvement, representation and a voice that is heard. We will also encourage patients and carers to be genuine partners in the delivery of their care through a commitment to patients' rights and active involvement in self management that suits their lifestyles.

A mutual NHS is more than an idea. This Action Plan contains a number of proposals that shift ownership and accountability to the people of Scotland and offer them the opportunity to take more control of their health. That brings with it responsibilities too. Our proposals for the development of a participation standard and a charter of mutual rights will enable us to maximise the opportunities that this brings. A mutual NHS is consistent with the founding values of the NHS. I believe strongly in the principles of equal access on the basis of need, available free at the point of care. Neither will we change the funding model of the NHS. It will remain firmly in the public sector. In stressing public ownership through a more mutual approach, we distance NHSScotland still further from market orientated models.

Our Action Plan sets out an ambitious programme of work for the next five years. It is right to be ambitious. There is little that is as important to Scotland as our health and our NHS.