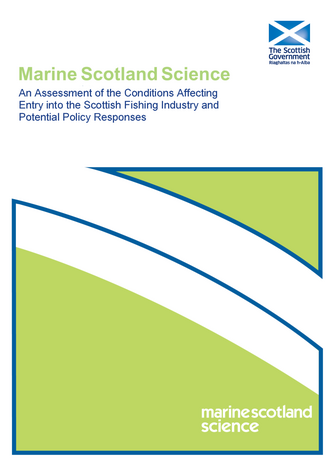 The current evidence indicates that public intervention beyond the status quo of providing information and training to the industry is not justified at this time. The identified barriers that do make it harder for new, young fishermen to enter the industry do not generally represent instances of market failure and evidence suggests that groups of private individuals e.g. the POs, local councils and wider industry, are already working in a productive capacity to correct and mitigate barriers to entry. An area for consideration is the increasing non-British crewing phenomenon. The Scottish industry, including the majority of the younger workers, is predominantly British. Nonetheless, scope exists for improved government monitoring of this situation going into the future to enable the Government to achieve its economic strategy and aspirations for the Scottish fishing industry.

Compared to the age structure of the EU, UK and Scotland, the Scottish fishing industry appears to employ a proportionate number of younger workers: the average age of the fishermen surveyed was 39.4 years and the highest proportion of fishers are found in the 35-49 age cohort. This evidence does not reflect the concern that the industry faces a 'new entrants' problem that government and industry need to address. This situation is however being somewhat substituted by foreign workers. Although the industry is still dominantly British, better and more regular government monitoring of the labour market trends within the industry represents a potential practical response.

The barriers to entry within the Scottish fishing industry are found to be structural rather than strategic. Barriers include financial start-up costs, low exit levels, skills and training requirements and expectations of profitability and returns on investment. High start-up costs in particular are perceived as a significant barrier to entry. While this is certainly the case in the trawl sector fishing for quota stocks, other sectors report relatively low barriers to entry in terms of cost. This suggests that alternative low cost avenues do exist for young fishers to enter and work their way up through the industry by building capacity, experience and financial capital over time.

It is likely that financial start-up costs would be less of an issue if the expected returns on investment were higher. Evidence indicates that most fleet segments are, on average, profitable, but often at relatively low levels given the significant investment required and the inherent risks which the industry faces. In several sectors wages are low in comparison to the UK average, with industry representatives suggesting that this undermines the industry's ability to attract new, young workers.

The other key issues affecting the age structure of the fishing industry are a low rate of exit of older fishermen and the retention of younger crewmen. Older fishermen are often unable or unwilling to retire, which constrains the recycling of quota, licence and vessel ownership to younger fishers and ages the workforce of the industry. Retaining younger crew is a problem as the industry faces competition from the competitive oil and gas, Merchant Navy and renewables sector on account of better wages and wage security.

There are a number of policy responses that could be implemented although overall impacts are uncertain. These include an increase in financial assistance, the provision of quota or licences for new entrants, the facilitation of community quota holdings and changes to the current FQA system. The likelihood, however, is that many of these policies- in particular any administrative redistribution of quota- would create issues of inefficiency, inequity and unintended consequences such as increasing the market price for quota without any guarantee of increasing the rate of entry.

Options exist for a number of more limited but practical policy responses that may be more appropriate. For instance, strategic and targeted funding commitments for training and support, minor changes in aspects of how quotas are traded, the provision of information for skippers wishing to retire, government monitoring of industry labour market trends, and dissemination of information regarding best industry and community practise in encouraging new, young entrants into the industry.