Concerns regarding declining sea trout populations on the West Coast of Scotland in the late 1980s and early 1990s led Scottish Government to set up a long term monitoring programme on the River Shieldaig in Wester Ross during the mid 1990s. Today, the Shieldaig field station is manned by two permanent members of staff, station manager Jim Raffell and assistant Andy Moys.  The map shows the location of the field station at the mouth of the River Shieldaig.  Also shown are the positions of local salmon farms (black squares). 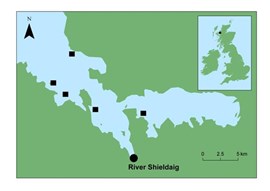 In 1999 the installation of a two-way fish trap approximately 150m from the sea allowed the return rates of sea trout to be examined, providing the only index of marine performance of sea trout in Scotland. The role of salmon farms, and in particular sea lice, on the observed declines of sea trout has been the subject of considerable controversy.  The work programme at the Shieldaig site was therefore designed to provide data to investigate potential links between lice, farms and sea trout. To do this, the following long term data sets have been collected at the Shieldaig site since 1999:

Over the years Loch Shieldaig has been the focus of a number of short term projects undertaken by staff from throughout Marine Scotland Science. These projects have focussed on understanding sea lice dynamics and the role played by salmon farms.

A list of publications produced by these studies is available and a current project, the Loch Torridon Acoustic Array, is investigating the movements of salmonids in the wider sea loch. There is also a Biologist's Blog, which has upates of the work that's ongoing at the site.