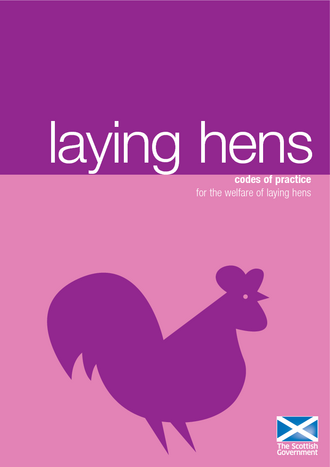 A person responsible for a farmed animal must not attend to that animal unless that person is acquainted with any relevant animal welfare code and has access to that code while attending to that animal.

In Regulation 2 it states that "animal welfare code" means a code of practice issued under section 37 of the Animal Health and Welfare Scotland) Act 2006.

To cause or permit unnecessary suffering is an offence under Section 19 of the Animal Health and Welfare (Scotland) Act 2006. The breach of a code provision, whilst not an offence in itself, can nevertheless be used in evidence as tending to establish the guilt of anyone accused of an offence under the Act (Section 37(9)).

Regulation 5(1) of the Welfare of Farmed Animals (Scotland) Regulations 2010 (S.S.I. 2010 No. 388) states that a person responsible for a farmed animal must ensure that the conditions under which that animal is bred or kept comply with the requirements set out in Schedule 1.

In relation to the duty in paragraph (1), a person responsible for a farmed animal must have regard to its species; degree of development; adaptation and domestication, and physiological and ethological needs in accordance with established experience and scientific knowledge.

Where an inspector considers that a farmed animal is being kept in contravention of any provision of these Regulations, the inspector may serve a notice on the person who in the opinion of the Inspector is responsible for that animal requiring that person, within the period stated in the notice to take any action that the inspector considers to be reasonably necessary to ensure compliance with these Regulations and the Inspector shall give reasons for requiring that action to be taken.

The Code is intended to encourage all those who care for farm animals to adopt the highest standards of husbandry. Without good stockmanship, animal welfare can never be adequately protected. Adherence to these recommendations will help flock-keepers to reach the required standard.

The welfare of laying hens is considered within a framework, elaborated by the Farm Animal Welfare Committee, and known as the 'Five Freedoms'. These form a logical basis for the assessment of welfare within any system together with the actions necessary to safeguard welfare within the constraints of an efficient livestock industry.

The Five Freedoms are based on an animal's needs as follows:

In acknowledging these freedoms, those who have care of livestock should practise:

Part 2 of the Animal Health and Welfare (Scotland) Act 2006 contains the general law relating to animal welfare. Broadly it is an offence (under section 19 of the Act) to cause or permit suffering to any domestic or captive animal by anything that is done or omitted to be done, and an offence (under section 24) to fail to take steps to ensure that the needs of an animal are met.

Section 32 of the Act empowers an inspector or a police constable to take possession of an animal which is considered to be suffering or in danger of suffering. Section 34 gives the courts the power to make a disposal order for seized animals which can allow these animals to be sold, destroyed or disposed of in another manner. The reasonable costs involved, including veterinary treatment can be recovered from any proceeds from the sale of the animal. A disposal order can be made before a charge under the Act has been brought.

Under section 40 of the Act a court has the power to disqualify a person convicted under the Act from owning, keeping, dealing in, transporting, taking possession or taking charge of animals. The ban can specify a particular kind of animal or all animals for such a period as the court thinks fit.

This Code applies in Scotland only and has been issued by the Scottish Ministers (following approval by the Scottish Parliament). It replaces (also as regards Scotland only) that part of the existing Domestic Fowls Code (issued in 1987), relating to the welfare of laying hens.
Similar codes have been produced in England, Wales and Northern Ireland.
Introduction