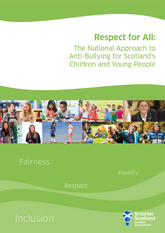 Age: Age is a protected characteristic although prejudice and discrimination based on age is not applicable in school settings, it can affect children and young people in a variety of other settings. For example, in workplaces, further and higher education and in wider society.

Asylum Seekers and Refugees: Children and young people who are asylum seekers or refugees may be at greater risk of bullying directly and indirectly. Some bullying behaviour against these groups may be of a racist nature which, given that race is a protected characteristic, can contravene equality legislation and have hate crime implications. Stigma, due to lack of knowledge and, given that race is a protected characteristic, understanding of asylum seekers and refugees, and reluctance to burden parents with extra worries can allow bullying to go undetected and continue.

Body Image and Physical Appearance: This can be hugely important to children and young people with bullying because of body image having the potential to negatively impact on their wellbeing. In some cases, body image and physical appearance may relate to a protected characteristic, such as race or disability.

Disability: Disability is a Protected Characteristic. People who bully others may see disabled children and young people as being less able to defend themselves and less able to tell an adult about the bullying. The language and behaviour used may be a result of a lack of understanding about the nature of a person's disability. Increased knowledge and understanding about disability and the impact it can have can help reduce bullying.

Gender Identity and Transphobic Bullying: The term 'transgender' is an umbrella term for those whose gender identity or expression differs in some way from the sex that was assigned to them at birth. Gender identity reflects an individual's internal sense of self as being male, female, neither or aspects of both. Gender reassignment is a protected characteristic.

Transgender people face significant societal prejudice largely because they are perceived as not conforming to gender stereotypes, expectations and norms. As a result, transgender children and young people can be particularly vulnerable to bullying.

This can manifest in many ways including transphobic name calling or deliberately mis-gendering them. An individual may also experience transphobic bullying if someone is perceived to be transgender or someone they are associate with, is transgender, i.e a parent, relative or other significant figure.

The term 'gender reassignment' is a protected characteristic within the Equality Act 2010 and refers to those who propose to go through, are going through, or have gone through a process of gender re-assignment.

Gypsy/Travellers: Children and young people who are Gypsy/Travellers may be at greater risk of bullying directly and indirectly. Some bullying behaviour against these groups may be of a racist nature which, given that race is a protected characteristic, can contravene equality legislation and have hate crime implications. Perceived risks about bullying and given that race is a protected characteristic parents' own experiences of discriminatory behaviour may lead to low levels of enrolment and poor attendance for Gypsy/Traveller children and young people as well as early exit from formal education. Other Traveller families, such as Roma, may have similar concerns.

Homophobic language and jokes around the school can create a climate of homophobia; for example, the use of the word 'gay' to mean sub-standard or uncool. This type of language should therefore be addressed.

Intersectionality: Understanding the different and unequal social and economic outcomes for particular groups, based on intersections between race, ethnicity, class, gender, sexual orientation, disability, and age. In the context of anti-bullying, it is important to understand the connection between the experience of belonging to one or more of these groups and a resultant inequality in attainment and wellbeing.

Looked After Children and Young People: Looked after children and young people can be particularly vulnerable to bullying. Children can face bullying behaviour simply because they are looked after and seen in some way as 'different'. Children who are looked after away from home can also experience bullying behaviour in their residential care home, at school and in their community. Looked after children and young people may not always have a stable support network to turn to when experiencing bullying. For some children forming positive relationships with peers and adults can be more difficult due to their early childhood adversity. Developing trusting and supportive relationships between children and practitioners is required to address bullying of all forms and in all settings.

Racism and Race: Race is a protected characteristic. Children and young people from minority ethnic groups often experience bullying based on perceived differences in dress, communication, appearance, beliefs and/or culture as well as their skin colour and accent. The status of the ethnic group a child belongs to (or people assume they belong to) in a school, community or organisation can often lead to a child or young person experiencing bullying behaviour. This can arise from a misguided and/or learned belief that they are less valued and 'deserve' to be treated differently, or with less respect.

Religion or Belief: Religion or belief is a protected characteristic. Lack of knowledge and understanding about the traditions, beliefs and etiquette of different faiths can lead to religious intolerance. Lack of awareness about the differences in practices of religions such as prayer times, dietary requirements, fasting and the wearing of religious clothing or articles of faith can result in misunderstandings and stereotyping, which may lead to bullying. People who have a religion or belief as well as those who do not, are protected under the Equality Act 2010.

Sectarianism: Most people understandably associate sectarianism with religion, which is a protected characteristic. The reality of prejudice however means that your family background, the football team you support, the community you live in, the school you attend and even the colour of your clothing can mark you out for sectarian abuse - whatever your beliefs may be. In Scotland, sectarianism is most often related to Protestant and Roman Catholic divisions within Christianity but can also relate to other religions, for example Sunni and Shia Muslims within Islam, and Orthodox and Reform Jews within Judaism.

Sexism and Gender: Sex, sexual orientation and gender reassignment are all protected characteristics. Bullying in the form of derogatory language and the spreading of malicious rumours can be used to regulate both girls' and boys' behaviour - suggesting that they are not being a real man or a real woman. These terms can be of an explicit sexual nature and it is worth noting that many can involve using terms for people who are gay and lesbian as a negative towards a person's masculinity or femininity. Sexism and gender stereotypes feed into homophobia, biphobia and transphobia. Gender stereotyping, based on the notion of acceptable and unacceptable male and female behaviour, can leave children and young people who are perceived not to conform to these notions vulnerable to indirect and direct bullying.

Personality traits that do not fit into the unwritten rules of 'appropriate' male and female behaviour can lead to bullying because of the prejudice towards their perceived difference.

Socio-economic Prejudice: Bullying due to socio-economic status can take place in any community. Small differences in perceived family income/family living arrangements/social circumstances or values can be used as a basis for bullying behaviours. These behaviours, such as mocking speech patterns, accents, belongings, clothing, etc can become widespread through those considering themselves to be in the dominant socio-economic group. Bullying of children who endure parental substance misuse can also be prevalent.

Young Carers: The lives of young carers can be significantly affected by their responsibility to care for a family member who has a physical illness or disability, mental health problem, sensory or learning disability or issues with the misuse of drugs or alcohol. Young carers are at risk of bullying for a variety of reasons. Depending on responsibilities at home, they may find themselves being unable to fully participate in school or after-school activities or 'fun stuff'. This can make it difficult for them to form relationships; it can hinder successful transitions or lead to educational difficulties.