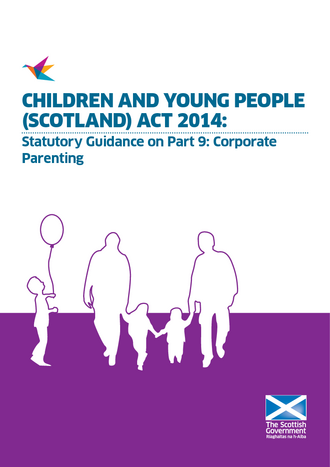 4. Calculation based on General Records Office Mid-Year Population Estimates 1981-2013, and Children Looked After Statistics, multiple years (figures for 'total numbers of Looked After Children' and 'eligible for aftercare services')

5. Definition is adapted from Sonia Jackson's definition of 'parenting' presented in M. Davies (ed) (2000) The Blackwell Encyclopaedia of Social Work, Oxford, Blackwell, and cited in the Scottish Government (2008) These Are Our Bairns: A Guide for Community Planning Partnerships on Being a Good Corporate Parent.

6. List of Executive Agencies correct at date of publication, April 2015

9. For further information on the national Getting it Right for Every Child approach, please see the relevant section of the Scottish Government website: http://www.gov.scot/Topics/People/Young-People/gettingitright

10. For further information please see Chapter 5 (Responsible Local Authority) of the Supporting Young People Leaving Care in Scotland: Regulations and Guidance on Services for Young People Ceasing to be Looked After by Local Authorities

11. For details of the UNCRC articles, and what they mean in Scots law, please see the relevant web pages of Scotland's Commissioner for Children and Young People: www.sccyp.org.uk/rights/uncrcarticles

12. "Relevant authority" is defined in Part 5 as any health board, local authority, the managers of any grant-aided school or the proprietors of any independent school.

13. Department for Education and Skills (2003) If this were my child … A Councillor's guide to being a good corporate parent, London

16. Scottish Government (January 2007) Looked After Children and Young People: We Can and Must Do Better, Edinburgh, p.7