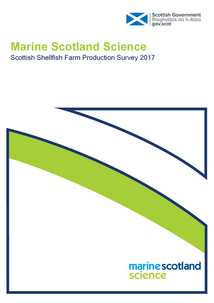 The survey indicates that the shellfish species cultivated in Scottish waters in 2017 were:

Production was dominated by mussel and Pacific oyster, although small quantities of scallop, queen scallop (queen) and native oyster were also produced. The 2017 production data for each species by region are given in Table 1. Additionally in 2017 there was cultivation of whiteleg shrimp ( Litopenaeus vannamei) and common periwinkle ( Littorina littorea) however due to the small number of these species being produced it is not possible to summarise these without revealing commercially sensitive information.

Table = Sales directly for human consumption;
On-growing = Sales to other businesses for on-growing.

Table production by species is illustrated in Figure 1, while trends in production for the table market and on-growing in Scotland are presented in Table 2.

Mussel production, for the table, increased by 6% in 2017 ( see figure 1) to 8,232 tonnes. This is the highest level of mussel production recorded in Scotland. The greatest contribution in regional mussel production was from Shetland, accounting for 6,647 tonnes or 81% of Scotland's total. There was a 69% increase in the production of mussels for on-growing in 2017. This was largely due to increased exports of part grown mussels to Northern Ireland and the Republic of Ireland. Pacific oyster production increased by 42% from 2016. The Strathclyde region produced 61% of Scotland's farmed Pacific oysters. Queen scallop production increased by 76% since 2016 and the production of farmed scallops increased by 34%, both these sectors continue to target small niche markets. Production of native oysters decreased by 0.5% from 2016. Native oyster production accounts for a small percentage of total oyster production, however, demand for this species continues to be high. Historical data for all shellfish species show that production levels vary year on year, this can be due to a number of different factors such as poor spat fall, algal toxins, poor growth, adverse weather and fluctuations in market prices.

Prices of farmed shellfish fluctuated throughout the year. Their value at first sale was estimated from the following figures obtained from the shellfish farming industry. These vary with demand, level of production and geographical area of origin. The average price of Pacific oyster was £0.40 per shell; native oyster, £0.60 per shell; scallop, £1.84 per shell; queen scallop, £0.12 per shell and mussel £1,226 per tonne. The value of the table trade is estimated from the production figures shown in Table 1.

Sites and Businesses
Introduction to the Year 2017 Survey