The total reported rod catch (retained and released) of wild salmon and grilse for 2018 is 37,196. Total reported catch is 67% of the previous 5-year average and is the lowest since records began in 1952.

The proportion of the rod catch accounted for by catch and release is among the highest recorded. In 2018, 99% of rod caught spring salmon (multi seawinter fish taken before 1 May) were released, as were 93% of the annual rod catch. A proportion of fish released from the rod fishery may be re-caught and hence inflate the catch statistics by appearing in the reported data more than once.

Trends in rod catch varied among individual stock components. Reported catch of spring salmon has generally declined since records began and, although there is some indication that catch has stabilised in recent years, it remains at a low level. Overall catch of salmon and grilse in later months, on the other hand, generally increased up to 2010, after which it fell sharply over the next 4 years before recovering slightly in 2015 and 2016 only to fall again in 2017 and 2018.

Reported catch and effort for the fixed engine and net & coble fisheries were among the lowest recorded by either fishery since records began in 1952.

Salmon and grilse reported as being of farmed origin represented 0.1% of the total Scottish catch in 2018. The distribution of farmed origin fish was highly uneven, with the West Coast region accounting for 81.5% of those reported.

This publication summarises the salmon fishery statistics based on returns from proprietors, occupiers or agents of fisheries throughout Scotland for the 2018 fishing season. These data are derived from 1,976 forms returned from 2,144 forms issued (92% return rate). Final published statistics for the previous 10 years have been based on return rates of between 93% and 94%.

These regulations will have an impact on the catch and effort data reported by Scottish salmon fisheries.

Catch and Effort Reported By Scottish Salmon Fisheries In 2018

A total of 2,475 wild salmon and grilse was reported caught and retained in the rod and line fishery. A further 34,721 wild salmon and grilse were reported caught and released. The combined retained and released rod catch is 37,196, which is 67% of the previous 5-year average. We have no time series of fishing effort information associated with the rod and line fishery. 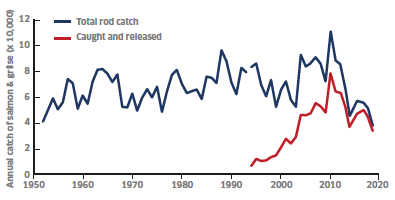 Trends in total rod catch varied among individual stock components (Figure 2). Spring salmon catch (for the purposes of this report defined as multi sea-winter fish taken before 1 May) has generally declined since records began. Although stabilising in recent years, catches remain at a low level. Overall catch of salmon and grilse in later months generally increased up to 2010, after which it fell sharply only to recover slightly in 2015 and 2016 before falling again in 2017 and 2018.

Catch and release
The proportion of the rod catch accounted for by catch and release has generally increased since 1994, when such information was first recorded. In 2018, 93% of the annual rod catch was released compared to less than 8% in 1994. Similarly, less than 1% of rod caught spring salmon were released in 1994 whereas 99% were released in 2018 (Figure 3). A proportion of fish released from the rod fishery may be recaught and hence inflate the catch statistics by appearing in the reported data more than once. 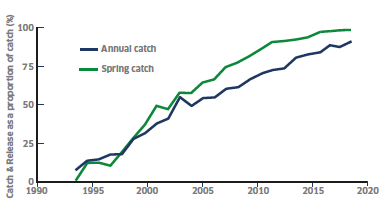 As a result of the Salmon Conservation Regulations, retention of salmon caught in coastal waters was prohibited.

Effort returns from Solway fisheries do not yield data that can be easily combined with returns from gear types in the rest of Scotland and data from this region are generally omitted when calculating a national index for fixed engine fishing effort.

A total of 3,751 wild salmon and grilse was reported caught and retained in the net & coble fishery from a reported effort of 25.5 crew months.

A total of 27 fish of farmed origin was reported caught by all methods in 2018. Fish of farmed origin represented 0.1% of the total number of salmon and grilse caught in Scotland. The distribution of farmed origin fish was highly uneven, with the West Coast region accounting for 81.5% of reports. Scottish regions are shown in MS Topic Sheet 67 (https://www2.gov.scot/Topics/marine/Publications/TopicSheets/tslist).

When inferring the status of stocks from catch data, it is important to consider trends over a number of years rather than simply focusing on catch levels for the most recent year. Both numbers of salmon caught and the allocation of catch among fishing methods may be influenced by many factors, the most obvious of which are environmental conditions.

The 2018 season catch returns provided an instructive illustration of the effects of environmental conditions on salmon catches. In 2018 Scottish rivers experienced a prolonged period of extremely low flows throughout the year. Such low flows are known to be difficult conditions for anglers catching fish, and salmon have been shown to delay entering rivers until flows increase, which can be towards the end of the fishing season. It is not possible to determine from catch data alone how much the drop in reported catch is a reflection of decreasing numbers returning to Scottish waters and how much is a result of challenging conditions.

Topic sheet no. 69 summarises the sea trout fishery statistics for the 2018 fishing season.

If you have a specific request for Scottish salmonand sea trout fishery information, not available atthe links on this page, please contact us directly at ms.catchform@gov.scot