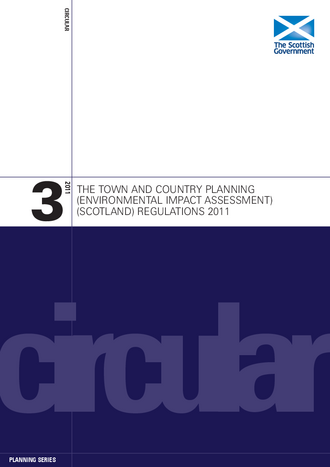 1. This Circular gives guidance on the Environmental Impact Assessment (Scotland) Regulations 2011 1 , ("the 2011 Regulations"), the regulations which transpose the EIA Directive 2 into the Scottish planning system.

3. This Circular also supersedes guidance previously given in Circular 1/2003 (The Environmental Impact Assessment (Scotland) Amendment Regulations 2002 Review of Old Mineral Permissions ( ROMPs)); and, following changes to the consenting arrangements for irrigation activities, Circular 3/2003 (Environmental Impact Assessment) (Water Management) (Scotland) Regulations 2003. Further information on corresponding changes to the EIA arrangements for certain water management projects is provided in paragraph 188 of this Circular. Guidance on EIA procedures specific to ROMP applications is contained in paragraphs 166 - 185 of this Circular.

4. Further, practical guidance is contained in Planning Advice Note ( PAN) 58 on Environmental Impact Assessment, published in 1999. It is our intention to update PAN 58 in due course, and the 2011 Regulations and this Circular take precedence over the advice in that PAN.

5. This Circular concerns development under the Town and Country Planning (Scotland) Act 1997. Corresponding provisions for development subject to planning control have been made in England, Wales and Northern Ireland.

6. Guidance on procedures for projects which are the subject of private legislation through the Scottish Parliament is available online via the Scottish Parliament's web pages 4 . The Transport & Works (Scotland) Act 2007, which received Royal Assent on 14 March 2007, enables approval for certain transport projects to be achieved through Ministerial order, replacing the use of Private Bills to authorise transport projects. Procedures for projects which are granted consent under other legislation are the subject of separate legislation and guidance issued by the Scottish Government, relevant UK Government departments or agencies.

7. This Circular is intended as a guide. It should be read in conjunction with the 2011 Regulations. Where guidance is offered on the interpretation of the legislation, it should be borne in mind that only the Courts can definitively interpret the law authoritatively.

8. The main aim of the EIA Directive is to ensure that the authority granting consent (the 'competent authority') for a particular project makes its decision in full knowledge of any likely significant effects on the environment. The Directive therefore sets out a procedure that must be followed for certain types of project before they can be given 'development consent'. This procedure - known as Environmental Impact Assessment ( EIA) - is a means of drawing together, in a systematic way, an assessment of a project's likely significant environmental effects. This helps to ensure that the importance of the predicted effects, and the scope for reducing any adverse effects, are properly understood by the public and the competent authority before it makes its decision.

9. Since the Directive first came into effect in 1988, it has been amended several times. The most recent amendments were made by Directive 2009/31/EC ('the Geological Storage Directive'), to update the list of projects falling within the scope of the Directive in light of new technology around carbon capture and storage.

11. Where EIA is required, there are three broad stages to the procedures:

b) the ES (and the application to which it relates) must be publicised. The Consultation Bodies and the public must be given an opportunity to give their views about the development and ES.

c) the ES, together with any other information, comments and representations made on it, must be taken into account by the competent authority (the planning authority or the Scottish Ministers) in deciding whether or not to give consent for the development. The public must be informed of the decision and the main reasons for it.

12. The 2011 Regulations must be interpreted in the context of the Directive itself. The Regulations apply to development in Scotland:

a) for which an application for planning permission is received by a planning authority or which is referred to the Scottish Ministers for determination; or

c) which is carried out under permitted development rights; or

d) which is carried out under permission granted by a simplified planning zone scheme or enterprise zone order;

e) for which an application for a review of mineral permission under Sections 8, 9 or 10 of the 1997 Act is received by a planning authority ( see paragraph 144), and applications for approval of ROMP conditions 5 ;

f) for which an urgent application (for Crown development) is made to the Scottish Ministers under Section 242A of the 1997 Act (see paragraphs 171- 172);

The Regulations also apply to development with significant transboundary effects (regulations 36 and 37).

13. Planning authorities already have a well established general responsibility to consider the environmental implications of developments which are subject to planning control, and the 2011 Regulations integrate EIA procedures into this existing framework. In this way EIA can provide a more systematic method of assessing the environmental implications of developments that are likely to have significant effects. While only a small proportion of development will require EIA, it is stressed that EIA is not discretionary. If a planning application is made for schedule 1 development, or for schedule 2 development likely to have significant effects on the environment, EIA is required.

14. Where the EIA procedure shows that a project will have an adverse impact on the environment, it does not automatically follow that planning permission must be refused. It remains the task of the planning authority to judge each planning application on its merits within the context of the Development Plan, taking account of all material considerations, including the environmental impacts.

15. For developers, EIA can help to identify the likely effects of a particular development at an early stage. This can produce improvements in the planning and design of the development; in decision making by both parties; and in consultation and responses thereto, particularly if combined with early consultations with the planning authority and other interested bodies during the preparatory stages. In addition, developers may find EIA a useful tool for considering alternative approaches to a development. This can result in a final proposal that is more environmentally acceptable, and can form the basis for a more robust application for planning permission. The presentation of environmental information in a more systematic way may also simplify the planning authority's task of appraising the application and drawing up appropriate planning conditions, enabling swifter decisions to be reached.

16. In this Circular, Environmental Impact Assessment ( EIA) refers to the whole process by which environmental information is collected, publicised and taken into account in reaching a decision on a relevant planning application.

a) the relevant planning authority has notified the applicant in writing that EIA is required; or

b) the applicant submits a statement which they refer to as an Environmental Statement for the purposes of the Regulations.

19. Development of a type listed in Schedule 2 to the Regulations which:

is referred to in this Circular as ' Schedule 2 development'.

a) Schedule 1 development; or,

b) Schedule 2 development likely to have significant effects on the environment because of factors such as its nature, size or location, unless the EIA procedures have been followed.

22. Where EIA is required, information must be provided by the applicant in an Environmental Statement ( ES). This document (or series of documents) must contain the information specified by regulation 2(1) and in Schedule 4 of the Regulations. Regulation 14 allows developers to obtain a formal opinion from the relevant planning authority on what should be included in the ES (' a Scoping Opinion'). Under regulation 16, certain public bodies (defined in regulation 2(1) as ' the consultation bodies') must, if requested, make information in their possession available to the developer for the purposes of preparing an ES.

23. Regulations 17 and 18 set out the publicity procedures, including notification and publication arrangements, which must be followed by planning authorities on receipt of a planning application with an ES. Regulation 19 details the consultation arrangements where an ES is received by the planning authority including a Local Review Body (references in the regulations to the planning authority include a Local Review Body where an application is being considered on review under section 43A(8) of the Act, as amended). Similar procedures apply where an ES is submitted to Scottish Ministers (regulation 21). In all cases, applicants must also make a reasonable number of copies of the ES available to the public and may make a reasonable charge for them (regulation 22). Although the submission of an ES is not subject to statutory time limits, every effort should be made to submit it within a reasonable time scale. Until it is submitted, the application cannot be determined except by refusal.

25. Where a statement has been submitted which does not contain all the required information, the planning authority, Scottish Ministers or reporter (references in the Regulations to Scottish Ministers include a reporter where one has been appointed to consider an application or appeal) must ask the applicant or appellant (as the case may be) to supply 'further information' (regulation 23). This information, and any other substantive information provided voluntarily by the applicant and relating to the ES is defined as 'additional information' (regulation 2(1)) and must be publicised in the same way as the statement itself (regulation 24).

26. When determining an EIA application, the planning authority, Scottish Ministers or reporter must inform the public of their decision and the procedures for challenging its validity (regulation 26). See paragraph 142 for more information.

28. The effect of the 2011 regulations is to require that the environmental information must be taken into account before determining any application for multi stage consent in respect of EIA development, in the same way as it would before determining an EIA application. Regulation 30 makes a number of modifications to the regulations as they apply to applications for multi stage consent. See paragraphs 144 - 155 for more information.

30. Regulation 47 introduces new screening provisions for certain applications made under the Town and Country Planning (General Permitted Development) (Scotland) Order 1992, as amended, for prior approval or for a determination as to whether prior approval will be required (known as 'prior notification'). See paragraphs 71 to 75 for more information on permitted development rights.

ESTABLISHING WHETHER EIA IS REQUIRED