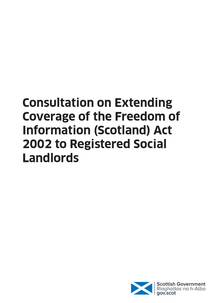 The Act provides a statutory right of access to information held by Scottish public authorities. These range from the Scottish Parliament and Government, to local authorities, NHS boards, higher and further education bodies, doctors and dental practitioners, among others.

Requested information must be provided unless it is subject to one or more exemptions, as set out in the Act. If a requester is dissatisfied with the response received to a request or does not receive a response, he or she can ask the authority to review its decision or handling of the request.

The Scottish Information Commissioner both promotes and enforces the Act. Requesters who remain dissatisfied with the conclusions of an authority's review of their request can appeal to the Commissioner for a decision. The Act came into effect on 1 January 2005.

Extending coverage of the Act

The provisions of the Act can be extended to bodies that appear to the Scottish Ministers to exercise functions of a public nature or which provide, under a contract with a Scottish public authority, a service which is a function of that authority.

This can be done by making an order under section 5 of the Act, which designates those bodies as a Scottish public authority only for the purposes of the Act. They are then subject to the full requirements of the Act and must therefore respond to written requests for information and proactively publish information described in their Publication Scheme. A body which is designated as a Scottish public authority by an order under the Act also automatically becomes subject to the requirements of the Environmental Information (Scotland) Regulations 2004 ( EIRs).

In accordance with section 7(3) of the Act, bodies proposed to be designated would only be covered in respect of the information they hold about specified public functions or services. Their duties under the Act would therefore be limited to those functions or services as set out in the order.

The Scottish Government brought forward Scotland's first order under section 5(1) of the Act in September 2013. Following consideration by the Parliament the order came into effect on 1 April 2014. The order extended coverage of the Act to certain trusts which have been created by a local authority to deliver sporting, cultural and leisure facilities and/or activities on behalf of that local authority.

A further order extending coverage of the Act to private prison contractors, providers of secure accommodation for children, grant-aided and independent special schools and Scottish Health Innovations Ltd came into force on 1 September 2016.