Fishery districts and regions
For the purposes of these statistics, data are combined geographically into 109 Districts which are further aggregated into 11 Regions. Districts correspond either to a single river catchment together with adjacent coast or to groups of neighbouring river catchments and associated coastline. The blank area in both region and district maps corresponds to that part of the Border Esk catchment located in Scotland. Functions relating to the management of salmon and sea trout in respect of the whole of this system rest with UK ministers.

The fisheries
Data are also collated by fishing method. All Scottish salmon and sea trout fisheries fall into one of three broad categories ( see photos at the top of this page):

Catches
Currently each fishery is required to provide the numbers and total weights of both wild and farmed salmon and grilse, as well as sea trout, caught and retained in each month of the fishing season. In addition, rod & line fisheries are currently required to provide the monthly numbers and total weights of those salmon, grilse and sea trout which were legally caught then released back into the river (catch & release). Data are published as reported. No attempt is made to correct for 'grilse error', the mis-classification of fish between grilse and salmon categories.

Continuity of the data collected
Aggregate monthly data have been collected annually from Scottish salmon and sea trout fisheries since 1952.

The number and weight of sea trout caught and retained by both net and rod fisheries have also been collected throughout the time series although the categories by which sea trout were grouped have varied. Between 1952 and 1993, fisheries were simply required to report sea trout taken as a single category. Between 1994 and 2003, fisheries were required to report sea trout weighing less than 0.5 kg separately from those weighing greater than 0.5 kg. During both periods, any reports of finnock ( see below) catches were disregarded. 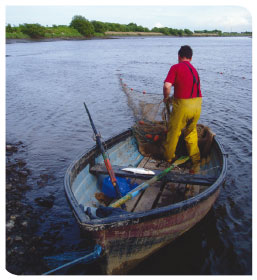 Finnock are sea trout which have spent less than a year at sea before making their first return to fresh water. They may also be known as whitling or herling. Since 2004, fisheries have been required to report finnock catches and record these and other sea trout as separate categories.

Quality assurance
Reported data are verified against a series of checks including missing information, catches reported outwith the legal fishing season and mean weights outwith pre- defined limits. Where necessary, the data are referred back to the person completing the questionnaire for clarification. The information published, however, is the summation of the reported data. No attempt is made to correct that data for non-returns or incomplete coverage of existing fisheries. Return rates of catch forms since 1997 are available for download, see Provision of Information section below.

Salmon and sea trout fishery statistics for the most recent season available are summerised in topic sheets 68 and 69 respectively. These may be downloaded at http://www.gov.scot/Topics/Statistics/About/NatStats/Topics/marine/science/Publications/TopicSheets/tslist

The associated summary data may be downloaded by following the appropriate links at http://www.gov.scot/Topics/marine/science/Publications/stats/SalmonSeaTroutCatches

The information available for download is the best available at the time of publication. Our records are amended when further information becomes available and updated annually in April when the statistics for the most recent fishing season are published. The most accurate historical data may be obtained directly from Marine Scotland Science. Contact information is provided below.

Contact
If you have a specific request for Scottish salmon and sea trout fishery information, please contact us directly at: ms.catchform@scotland.gsi.gov.uk