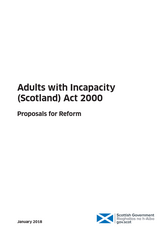 How does the law work at present?

Most people ask a solicitor to draw up a power of attorney but it can be done without a solicitor. It needs to be expressed in writing, the granter must say how his/her incapacity must be determined if the authority of the attorney starts with the incapacity of the granter, and it must incorporate a certificate from a practising solicitor, member of the Faculty of Advocates or registered and licensed medical practitioner stating the granter has been interviewed immediately before subscribing the document, understands the nature and extent of the power of attorney and is not acting under undue influence.

What changes are we proposing?

The Scottish Government believes that a power of attorney continues to be a really useful way of ensuring your autonomous choices are still given effect. But we are aware that sometimes arguments have arisen over whether the power of attorney document is clear about when it comes into force and whether it gives enough authority to make certain decisions about a person’s care and welfare.

Welfare attorneys are appointed by a person in the event of their future incapacity, and their powers come into effect when the granter is unable to take welfare decisions, or the attorney reasonably believes this.

Without clarity on this matter there could be perceived a risk that a power of attorney comes into effect in a manner and at a time that the granter did not intend or consent to. We would therefore like views on whether there is a need to require that a power of attorney contains clear instructions on how the granter wishes their incapacity to be determined before a power comes into effect.

In particular, the Mental Welfare Commission in their 2015 Advice note on deprivations of liberty states:

“Unfortunately the Act is unclear as to the extent to which welfare attorneys may consent to arrangements that amount to deprivation of liberty where the adult appears to resist or oppose them (even where the power of attorney actually permits this), nor where a power of attorney can use or authorise restraint. Under these circumstances is it highly recommended that a welfare attorney does not consent to such measures on behalf of an unwilling granter, and where they are uncertain how to proceed apply to the Sheriff for direction under section 3 of the Adults with Incapacity Act as to their powers”. [12]

We have been made aware of a number of cases where the existence of a welfare power of attorney has been deemed to be insufficient for the decisions required and an application for welfare guardianship has been required which has caused additional delay and distress to the families concerned.

However we consider that in the same way that adults who have the capacity to do so can agree to significant restrictions on their liberty, an adult can consent to these restrictions should they arise in the future, subject to certain safeguards. The ECtHR has confirmed that a person can only be considered to be deprived of their liberty if there is no valid consent to that position. [13] We consider that this principle can be applied to consent by an adult in advance of losing capacity, as long the consent is valid and relates to specific arrangements.

We are proposing that a set of advance conditions should be put in place if the granter of a power of attorney wishes the attorney to rely on them in the future in the event of the granter needing care in an environment that may result in significant restrictions on their liberty.

We would suggest these advance consent conditions would need to follow specific wording and meet criteria to be set out in regulation. These advance consent conditions would enable the adult to consent to specified arrangements enabling his/her care and treatment to be put in place at a later time, which, if the person did not consent to them would give rise to a significant restriction on their liberty. There would require to be regular reviews of the arrangements, and such arrangements would also benefit from the right of appeal proposed in Chapter Ten. A general declaration would not suffice otherwise there might be a danger that a person could forego his/her article 5 protections for an unknown period of time in unforeseen circumstances.

Angus had asked his daughter to act as his power of attorney for a number of welfare and financial matters in the event that he was unable to make decisions for himself about those things in the future.

He remembered however that his elderly mother had developed severe dementia which had caused her to wander from her home putting herself at risk. He spoke to his daughter about it and decided that if he was similarly affected by dementia later in life, he would want his daughter to be able to make decisions that could keep him safe, and ease her worry as he remembered how much upset his mother’s behaviour has caused him. He therefore spoke to his solicitor and had an extra section added into his power of attorney which clearly stated that if he was putting himself or other people at risk by his actions then his daughter had the authority to choose a place for him to live where he would be kept safe, even if that meant his liberty was restricted. He also added a condition that any placement had to be kept under regular review.

Do you agree that there is a need to clarify the use of powers of attorney in situations that might give rise to restrictions on a person’s liberty?

If so, do you consider that the proposal for advance consent provisions will address the issue?

Please give reasons for your answers.

Is there a need to clarify how and when a power of attorney should be activated?

If you have and answered yes and have views on how this should be done, please comment here.

Powers of attorney are well tried and tested models of ensuring that an adult’s will and preferences are followed, even if the adult is no longer able to articulate their will or preference themselves. But sometimes a person may need a bit of help and support in making a decision about a certain matter and would like to involve a trusted family member or friend in coming to a decision, or understanding a situation without losing the authority to make that decision for themselves.

We know that Article 12 of the UNCRPD requires States to provide help to people who may need support in making decisions. That help can come in many ways, one of which is support from a family member or friend.

Certain countries already have a system of persons who can provide support for decision making. Canada is a pioneer in this field with a number of examples of supported decision making regimes. In British Columbia, the Representation Agreement Act 1996, allows adults to enter into an agreement to appoint someone to support them in decision making, with that person being given legal recognition.

In the state of Victoria, Australia anyone aged 18 or over can appoint a person to become a supportive attorney for them if they have the capacity to make such an appointment. A person who makes a supportive attorney appointment, known as the principal, gives power to the person they appoint to access or provide information about them to organisations (such as hospitals, banks and utility providers), communicate with organisations, communicate their decisions and, give effect to their decisions.

The intention is that a supportive attorney who supports the principal to make and act on their own decisions can increase the independence and self-reliance of the principal.

We are proposing that a person who has capacity to understand the consequences of that decision can appoint an official supporter, who can help the person understand situations and make decisions but does not have the authority to make decisions on behalf of the adult. The supporter would have access to as much information as the adult would wish but unless a point is reached where the adult no longer has capacity to understand the implications of a decision, the adult would always make the decision. The supporter could become an attorney for the adult, if the adult wished that, but equally someone else could be appointed as an attorney.

We would also like views on how a supporter might be appointed. One option would be for a power of attorney to contain an appointment of a supporter, and for the supporter to be registered in the same way as an attorney is as present. Supportive attorneys in Victoria, Australia are appointed by a form signed by the principal in front of witnesses but at present are not registered, which is another model that could be considered.

Oliver’s partner used to deal with all the financial matters in their household. After his partner’s death, Oliver was struggling to understand how to manage his money, as the bank accounts were a mixture of online accounts and more traditional bank accounts. Oliver asked his niece Laura if she would be his official supporter and help him manage his money. Laura was happy to do so. She was copied into correspondence from the banks and helped Oliver amalgamate his accounts so that he was able to manage his money more easily.

Oliver then had to go to hospital to see about having his cataracts done. As his official supporter, Laura was copied into correspondence about his appointments and was able to ensure that Oliver got to all his appointments on time, understood fully what the procedures involved and helped him to reach a decision about his treatment that he was happy with.

Do you think there would be value in creating a role of official supporter?

If you have answered yes, please give us your views on how an official supporter might be appointed.

Countries that have created a role of supported decision maker have used different names, such as supportive attorney in Australia, or a ‘Godman’ in Sweden, meaning custodian. We have suggested ‘official supporter’ Do you think this is the right term or is another term preferred?