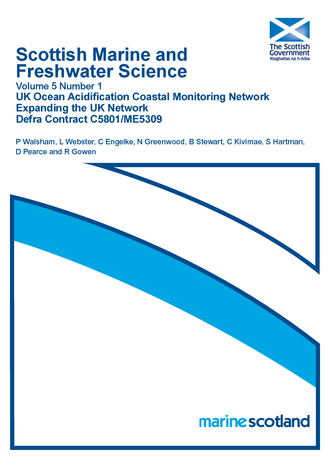 1. The OSPAR ICES Study Group on Ocean Acidification ( SGOA) and the Global Ocean Acidification Observing Network (GOA-ON) have both identified the need for a commitment to long-term monitoring at sites in coastal and inshore waters to distinguish long-term anthropogenic signals from short-term spatial and temporal variability.

2. Limited monitoring of the changes in ocean acidification is undertaken in coastal waters around the UK. A short UK Integrated Marine Observing Network ( UK- IMON) demonstration study was commissioned to monitor coastal waters for the first half of 2013 for the carbonate chemistry parameters, Total Alkalinity ( TA) and Dissolved inorganic carbon ( DIC).

3. The project was divided into two distinct parts, namely a preliminary feasibility study, to examine the use of moored water samplers to collect water samples for the analysis of dissolved inorganic carbon ( DIC), and discrete sampling at various locations around the UK for Total Alkalinty ( TA) and DIC analysis.

5. The authors recommend that a further, more detailed comparison should be undertaken to include a moored sampler with sample preservation. The introduction of a procedure to minimise aeration of samples during processing and filtration, together with any effect of long-term (weeks) storage of samples (during automated sampler deployment) on sample integrity should also be investigated.

6. Discrete water samples were collected for TA and DIC analysis between January 2013 and August 2013 (site dependant) at five locations around the UK; the Minch North (Scottish West Coast), Stonehaven (Scottish East Coast) and the Cefas Smart Buoys in Liverpool Bay and the Celtic Deep and at the AFBI Mooring in offshore waters of the western Irish Sea.

7. Discrete surface water samples were collected in the Minch North between January and July 2013, TA and DIC mean concentrations were 2289 µM/kg, (n = 27) and 2106 µM/kg (n = 28), respectively. TA and DIC concentrations dropped towards the end of May, this drop coincided with the algal bloom in the region at the time. A decrease in DIC concentrations during the spring bloom is to be expected. However, TA concentrations would be expected to increase around an algal bloom and it is unclear why the concentration decreased at this time. The initial six month sampling period financed by UK- IMON does not allow for observation of seasonal trends, but informs the design of future long-term monitoring at this location and has therefore been very useful.

8. Discrete surface water samples were collected at the Cefas SmartBuoys, located in the Celtic Deep and Liverpool Bay, and at the AFBI mooring in offshore waters of the western Irish Sea in March, May and August 2013 for TA and DIC analysis. Mean concentrations of TA and DIC in water samples collected at the offshore sites (Celtic Deep Buoy and AFBI mooring) were 2313 µM/kg (n=15) and 2080 µM/kg (n = 15), respectively, while at the coastal Liverpool Bay SmartBuoy mean concentrations were 2283 µM/kg (n=9) and 2076 µM/kg (n=9), respectively. Due to only sampling at the sites on three occasions, there was insufficient data to make any assessment of seasonal trends, but begins to build the baseline for future long term monitoring.

12. The long-term monitoring at Stonehaven highlights the requirement for a robust data set to distinguish changes as a consequence of anthropogenic inputs from that of natural seasonal and inter-annual variability. To understand the changes that occurred during 2012 it is clear there is a need for integrated monitoring, which includes measurement of the biological parameters such as phytoplankton.