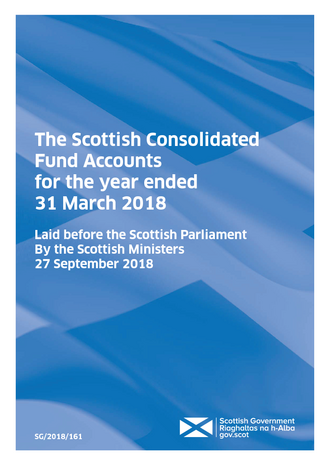 The Scottish Consolidated Fund was set up following devolution in 1999 and received its statutory powers under the Scotland Act 1998.

This account has been prepared under sections 19 (2) and 19 (4) of the Public Finance and Accountability (Scotland) Act 2000 which require the Scottish Ministers to prepare and lay before Parliament an account showing payments into and out of the Scottish Consolidated Fund.

Also under devolved powers from the 2012 Scotland Act, devolved taxes in respect of Land and Buildings Transactions Tax and Scottish Landfill Tax have been managed in Scotland from 2015-16 onwards. Revenue Scotland was established by the Revenue Scotland and Tax Powers Act 2014 to administer and collect both taxes. The taxes collected by Revenue Scotland are paid to the Scottish Consolidated Fund under sections 28 to 31 of the Scotland Act 2012.

The Devolved Taxes Account is prepared and published separately and can be accessed at www.gov.scot. The grant payable from the UK Parliament has been adjusted to take account of these locally raised tax receipts.

Receipts not authorised to be used to support expenditure shall also, by virtue of section 64 (3) of the Scotland Act 1998, be payable into the Fund.

Funding is drawn down from the Scottish Consolidated Fund to support the spending plans approved by the Scottish Parliament in the annual Budget Act.

Sums are paid from the Fund in accordance with sections 4 and 6 of the Public Finance and Accountability (Scotland) Act 2000.

Those bodies that draw down funding from the Scottish Consolidated Fund, principally the Scottish Government, provide annual accounts reporting their stewardship of those funds.

These accounts show the transactions for the services set out above. The receipts paid into the Fund during the year totalled £34,258 million with payments from the Fund of £34,251 million. The effect of the resulting surplus of £7 million is to increase the balance at the Government Banking Service by this amount to £250 million.

The Permanent Secretary of the Scottish Government, in her role as the Principal Accountable Officer for the Scottish Administration, is required to sign any account prepared in pursuance of section 19 (2) of the Public Finance and Accountability (Scotland) Act 2000.

The accounts of the Fund are audited by Audit Scotland, who are appointed by the Auditor General for Scotland as set out in section 21 of the Public Finance and Accountability (Scotland) Act 2000.