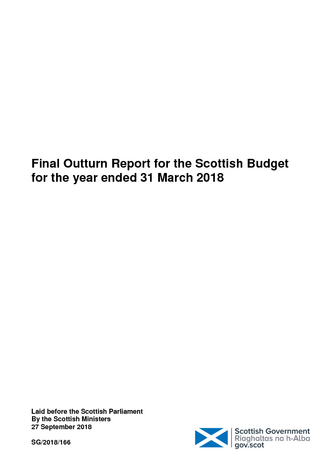 2. Building on the Scottish Government's 2017-18 Consolidated Accounts, this report summarises the Financial Outturn of the bodies within the Scottish Administration, to report against the statutory limits authorised by the Scottish Parliament in the Budget processes.

3. This report has been extended this year to also include the other bodies funded directly from the Scottish Budget (Forestry Commission (Scotland), Scottish Parliamentary Corporate Body and Audit Scotland). In addition, information on the capital borrowing repayment budget is provided separately for the first time reflecting that 2017-18 represents the first year in which actual funding has been drawn down for this purpose.

4. These accounts together report on the spending authorised by the Scottish Parliament in the annual Budget Act.

5. Within the Scottish Government's 2017-18 Consolidated Accounts, there is a final expenditure outturn of £34.5 billion against the budget of £34.8 billion resulting in an underspend of £339 million.

6. After including information for the other bodies included within the Scottish Administration boundary, and including the capital borrowing repayment budget, there is a final expenditure outturn of £39.2 billion against the approved Parliamentary budget of £39.6 million, resulting in an underspend of £385 million.

7. The inclusion of the Directly-funded bodies completes the picture, where the overall reported position for the total Scottish Budget in 2017-18 is an expenditure outturn of £39.3 billion against the approved Parliamentary budget of £39.7 million, resulting in an underspend of £389 million, which represents just one per cent of total budget.

8. The Provisional Outturn statement announced in June also reported the position in terms of Scottish Government expenditure against the fiscal controls set by HM Treasury. The two sets of outturn information are not strictly comparable. The scope of what is included in this report is determined by the requirements of the Government's Financial Reporting Manual ( FReM) and covers elements that are not included within HM Treasury fiscal totals. The final 2017-18 outturn position against HM Treasury controls, which is expected to be broadly in line with the provisional outturn position, will be confirmed with HM Treasury during December.

9. Under the current devolution settlement, the Scottish Parliament is not allowed to overspend its budget. As a consequence, the Scottish Government has consistently adopted a position of managing income and expenditure to ensure it remains within the budget caps that apply, but is able to carry forward some resources for use in a future years to match demand.

10. The Cabinet Secretary for Finance and Constitution announced the Scottish Government's provisional financial outturn for financial year 2017-18 to Parliament on 21 June. The provisional expenditure outturn is £30.9 billion against a fiscal budget of £31.4 billion, resulting in an overall fiscal variance of £453 million which is carried forward in full to 2018-19 through the Scotland Reserve. The total of £453 million includes £335 million of funding planned for carry forward to 2018-19 (including £100 million relating to the implementation of 2016 Scotland Act powers allocated by HM Treasury one year earlier than required), together with around £50 million of devolved taxes income above the original forecasts and other underspends that have emerged late in the year.

11. After accounting for planned carry forwards to supporting spending in 2018-19, surplus devolved taxes receipts over forecast and fees for guarantees, the Cabinet Secretary reported that there was a remaining fiscal balance of just £66 million not yet committed to expenditure in future years. This sum represents just 0.2 per cent of the fiscal budget and is available to support the management of future budget volatility.

12. The provisional outturn variance for non-cash budgets is £123 million below budget. The non-cash budget variance represents differences between expected accounting adjustments and actual amounts and cannot be used to support general spending on public services.

Taxes, Borrowing and the Scotland Reserve.

13. The Fiscal Framework Outturn Report published by the Scottish Government on 20 September provides information in relation to Scottish Income Tax, fully devolved taxes, the use of borrowing powers and the operation of the Scotland Reserve (including the addition of the £453 million provisional outturn fiscal variance from paragraph 10 above).

15. The Scottish Government's approach means that budgets are carefully managed across more than one year, with limited funding carried forward into the following year to support budget plans approved by the Scottish Parliament. This approach recognises that there are fluctuations in demand and associated costs across spending review periods, ensuring there is no loss of spending power in Scotland.