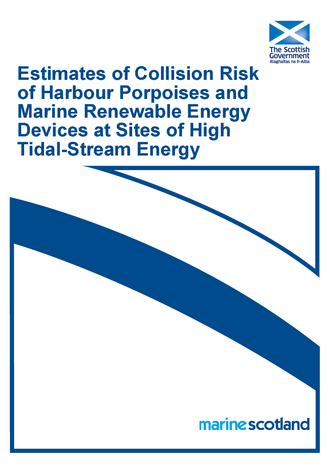 Extracting renewable energy from the sea is an attractive alternative to burning fossil fuels. Like any marine industry, obtaining energy from wind, waves or tidal-streams could have impacts on the marine environment (positive or otherwise). One frequently cited area of uncertainty for extracting energy from fast flowing tidal currents is the possibility of large marine vertebrates (including whales, dolphins, porpoises [collectively cetaceans], seals, sharks, turtles, and diving birds) colliding with submerged tidal-turbines - a scenario with parallels to the issues surrounding bird strikes by wind turbines.

Preliminary modelling work has suggested that interactions between tidal turbines and harbour porpoises (Scotland's most abundant cetacean) may be common, assuming porpoises occur in tidal-stream areas at densities similar to other Scottish coastal habitats. However, it remains unclear how true this assumption is, and particularly whether porpoises avoid or are attracted to these areas. The aim of this study, therefore, was to investigate how often porpoises occurred in two areas of immediate interest for tidal-stream development on the west coast of Scotland. These two sites were the tidal narrows of the Sound of Islay (between the islands of Islay and Jura) and the Kyle Rhea (between Skye and the mainland).

Surveys were carried out during the summers of 2009 and 2010 using a variety of standard and specifically adapted techniques. The primary tool was the use of a research boat (the Hebridean Whale and Dolphin Trust's RV Silurian) which was used to criss-cross the sites with observers visually scanning for surfacing porpoises. In addition, the vessel towed hydrophones to detect the echolocation calls of submerged animals. While these techniques are used routinely to investigate porpoise occurrence, the strength of the tidal streams meant that at times the water was moving at speeds close to that of the boat itself. This unusual feature, if ignored, could have severely biased the survey results. We therefore corrected the survey path with respect to the flow so that the boat crabbed across the moving water-mass at an equivalent rate to the progress over the bottom. We tested this new method and successfully applied it to both sites and their adjacent waters over a total of 16 days covering 1300 km of sea.

Harbour porpoises were seen and acoustically detected in all of the areas surveyed. Of particular interest for this study were the areas of strongest tidal flow in the Sound of Islay and the Kyle Rhea. Porpoises were seen and acoustically detected in both of these sites. However, rates of sightings and acoustic detections were an order of magnitude lower than surrounding waters. For example, sighting rates in the Kyle Rhea narrows were around 0.01 km -1 whereas to the south in the Sound of Sleat they ranged from 0.09 - 0.22 km -1. Acoustic detections showed a similar pattern with 0.2 click events km -1 in the narrows and 5.4 km -1 in open water immediately to the south.

While confirming that porpoises were not absent from these tidal-energy relevant habitats, the boat surveys demonstrated that porpoises occurred at such low densities in the fast flowing water that that our original plans for shore-based observations to investigate behaviour would be unrewarding within the time limits of the project. We therefore explored other techniques to better understand porpoise activity. We initially investigated the use of moored acoustic porpoise echolocation click detectors ( C-PODs), a standard technique used in many places to monitor porpoise presence. Their use, however, also proved problematic because of the flowing water. This time the water flowing past the fixed recorders produced high levels of noise which obscured the devices' abilities to detect porpoise calls. Deployments out of (but adjacent to) the strong flows were successful and the results were variable, suggesting that precise patterns of porpoise occurrence were site-specific and that many recorders would be needed to properly assess their use of such an area.

Given that the water movement was problematic for porpoise click recorders held stationary in the flow, we also explored the use of the same equipment but allowed it to drift freely in the current as part of location logging drogue systems. These proved highly successful and rapidly revealed patterns of porpoise distribution similar to the more intensive boat-based surveys. That said, because the recorders drifted with the current within which the animals were also moving, interpretation of the results requires care. In addition to mapping porpoise detections, the drifters also revealed spatial patterns in the distribution of the problematic ambient noise and may therefore be useful for determining where similar devices could be moored more successfully.

We also tested a new acoustic array-based method to determine the diving depth of echolocating porpoises. This method could be deployed from a drifting boat in flowing water and was therefore workable in tidal-energy sites where other methods were impractical. The trial revealed that dives were surprisingly shallow for this species despite some of the recordings being made in deep water. This suggests that diving behaviour data collected from other habitats may not be directly applicable to tidal energy sites.

Given these results, what, then, are the implications for likely rates of interaction between porpoises and operating tidal turbines? If we apply the new results to the encounter model used previously to investigate this issue, then the potential interaction rate falls from 13 to around 1.8 to 3.25 porpoise "encounters" per turbine per year. It must, however, be emphasized that this number is not a collision rate, but simply a rough indication of how often porpoises would encounter turbine blades if they took no action to approach or avoid them. Nevertheless this study suggests that, for the two sites at least, porpoise-turbine interactions are likely to be substantially rarer than if turbines had been deployed in other habitats.

Other marine mammal species were seen on the surveys. Most abundant were harbour and grey seals which were seen in high numbers both in the water and hauled-out immediately adjacent to the high-flow areas. A minke whale, bottlenose dolphins and an otter were also observed in the tidal narrows. No basking sharks were seen.

In terms of cetaceans, these surveys indicated that porpoises (as well as other, less frequently encountered cetaceans) did not appear to be particularly abundant within the tidal-streams of Kyle Rhea and the Sound of Islay. These findings notably contrast with results from Wales. Whether these Scottish results are also true for larger tidal-energy sites (such as the Pentland Firth) has yet to be determined. Furthermore, despite occurring at apparently low densities, we did see and hear porpoises in the tidal streams and it must be remembered that abundance is not the same as ecological importance. The tidal narrows are likely to be used for transit between adjacent water masses and therefore disruption of these passageways may also have wider implications for use of other habitats.