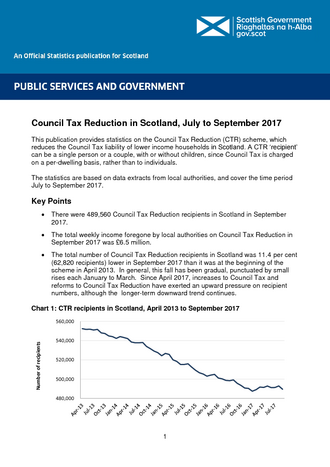 This publication provides statistics on the Council Tax Reduction ( CTR) scheme, which reduces the Council Tax liability of low income households in Scotland. A CTR ‘recipient’ can be a single person or a couple, with or without children, since Council Tax is charged on a per-dwelling basis, rather than to individuals.

The statistics are based on data extracts from local authorities, and cover the time period April to June 2017.

Notes:
1 Recipients are as at monthly count date. See Methodology Notes, Section 2 for more details. Available at
http://www.gov.scot/Topics/Statistics/Browse/Local-Government-Finance/Methodology/Ctaxreductionmethod
2 Figures are rounded to the nearest 10. Components may not sum to total due to rounding.

The total weekly income foregone for each local authority in April, May and June 2017 is shown in Table 2. The total for Scotland was £6.5 million in June 2017; an increase of almost £250,000 a week in income foregone since March 2017, reflecting the reforms listed in the first paragraph on page 2.

Notes:
1 Recipients are as at monthly count date. See Methodology Notes, Section 2 for more details. Available at
http://www.gov.scot/Topics/Statistics/Browse/Local-Government-Finance/Methodology/Ctaxreductionmethod
2 Weekly income foregone estimates are based on ‘number of recipients multiplied by average weekly reduction’ for each local authority and benefit type for the given month.
3 Figures are rounded to the nearest £100. Components may not sum to total due to rounding.

An Official Statistics publication for Scotland