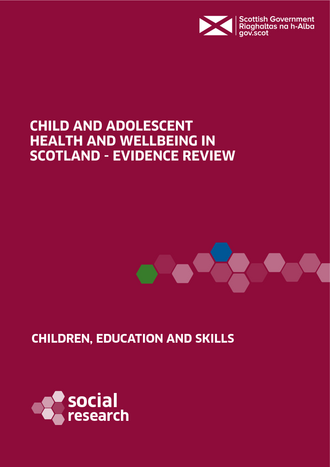 2.1 Elements within the Safe domain

The Safe SHANARRI domain is defined as 'Protected from abuse, neglect or harm at home, at school and in the community'. The measures identified for the Safe domain are around child protection, including accidental injury and assault, experience of bullying and physical fighting; and neighbourhood safety.

Most children in Scotland grow up feeling safe, but where this is not the case the implications for the child are far reaching. The issues relating to care and protection (including neglect, mental, physical or emotional abuse, parental substance misuse or poor parenting) are closely related to negative health and wellbeing outcomes ( i). For example, children's experiences of domestic violence has been found to have a harmful impact on a range of outcomes, including impaired physical, mental and emotional development and, in some studies, increased risk of aggression in adolescence or early adulthood ( ii). Many care and protection issues are classed as ACEs, which are associated with a range of negative health and wellbeing outcomes in adulthood, particularly when multiple ACEs are experienced. For example, those with 4 or more ACEs have been found to be more likely to have been in prison, developed heart disease and type 2 diabetes, have committed violence in the last 12 months and display health-harming behaviours (high-risk drinking, smoking, drug use) ( iii).

Where care and protection issues are the most serious, children may become 'looked after' by the local authority. There is evidence of particularly poor outcomes for young people who are looked after or care leavers. Care leavers are at increased risk of having experienced multiple ACEs which is also associated with poor outcomes.

Looked after young people tend to have lower levels of educational attainment than those who are not looked after. These differences are, in part, linked to the fact that looked after young people tend to leave school at younger ages. Looked after children are less likely than school leavers in general to go on to 'positive destinations', particularly higher education. Care leavers are also at a higher risk of experiencing long term unemployment or fractured employment routes and are overrepresented in the homeless population. Looked after children and care leavers generally experience poorer health than their peers. Young female care leavers are more likely to experience early pregnancy than those who are not care leavers. A third of young offenders reported having been in care at some point in their life ( iv).

An increase in children on the child protection register, referred to Scottish Children's Reporter Administration ( SCRA) and looked after by the local authority may be both due to greater family instability and an increase in the prevalence of child protection needs, but may also be due to better identification of existing cases through early intervention policies. Similarly, any differences in rates between Scotland and England are likely to be the result of different child protection systems as much as any underlying differences in prevalence of issues between countries. While it is crucial to monitor these statistics and understand the experience of this highly vulnerable group of children and young people, it is not possible to identify a desired direction of travel for these three indicators.

This lack of clarity applies equally to indicators that are proxies for some of the care and protection issues: namely hospital admissions due to accidental injuries and assault. Accidental injuries may occur due to neglect, but also a number of other reasons. For example, young people from lower socio-economic groups are more likely to be injured due to fighting, while those from higher socio-economic groups are more likely to be injured through sport. For both injuries and assault, a decrease in admissions may be the result of fewer underlying issues, or a smaller proportion of cases where the child is taken to hospital and admitted.

Bullying is a particular problem among children and adolescents and has a high prevalence across this age group as a whole. It has been linked to many short and long-term negative outcomes: for example, adolescent victims of bullying show reduced attendance and performance at school, poor social adjustment, increased medicine use, increased physical injury and higher levels of both physical and psychological health problems ( v), ( vi), ( vii), ( viii), ( ix).

Bullying is related to factors both within schools and within families which are discussed in the Included and Nurtured chapters. Both bullies and victims tend to report low levels of attachment to, and engagement with, their school ( x). Attitudes within a young person's peer group are also strong determinants of the prevalence of bullying and interventions that promote awareness and attitudinal change within the wider peer group context may be most effective in reducing bullying ( xi), ( xii). Within families, supportive parental attitudes have been shown to protect children from being both victims and perpetrators of bullying; whereas problems in family communication are associated with increased risk of becoming a bully ( xiii).

Physical fighting is the most visible form of violent behaviour among adolescents, and is also associated with participation in other activities that pose serious health risks, such as substance misuse ( xiv). Unlike bullying, physical fighting does not necessarily involve a power imbalance between a perpetrator and victim. In extreme cases, fighting involving weapons can result in serious injury and death among young people ( xv).

It is widely recognised within Scottish Government policy making that neighbourhood environment can impact the health of young people over and above individual factors. This includes aspects of both the social environment such as local social networks, and the physical environment such as crowding, pollutants, access to facilities and greenspace. Neighbourhood safety indicators cut across both social and physical aspects and low feelings of safety have been shown to adversely affect health outcomes in young people ( xvi).

For example, less affluent areas are often associated with physical dilapidation and unsafe recreation spaces compared with more prosperous neighbourhoods. This is, in turn, associated with lower physical activity levels as well as fewer opportunities for social interaction, leading to a lack of social support and an increase in loneliness for adolescents ( xvii). Even where there is good access to recreation spaces, negative perceptions of the area ( e.g. high crime rate) can lead to low use. Perceptions of neighbourhood safety among both parents and young people themselves have been shown to be an important determinant of children's activity levels ( xviii).

Consultation with young people has shown that they consider a secure environment, including feeling safe in their area, to be a prerequisite for health and wellbeing ( xix). Research with children and young people in disadvantaged areas found that the need to avoid certain routes at certain times to avoid areas occupied by people perceived to be aggressive due to alcohol and drug use can mean that access to recreational or other resources is restricted. This, in turn, impacts on young people's current wellbeing and potentially their future development ( xx).

Measures relating to young people's area discussed in this section relate specifically to perceptions of neighbourhood safety. Measures around access to greenspace and play areas are considered under Active, while relationships with neighbours are considered under Included. However, it is important to note the complex connections between all these factors.